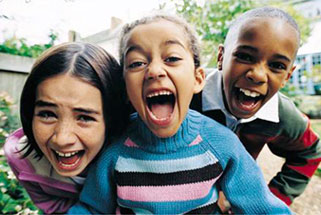 I hope you had an enjoyable Father's day a few weeks back. It's a happy day for many people as we take time to thank and honor our dads. But not for all. Maybe you always wanted to be a dad but it hasn't happened OR you had an absent or abusive father OR maybe you didn't even know your dad. That can be hard. May you know God's comfort and strength.

My dad is 91 years of age now and he grew up in a Salvation Army boys home, never knowing his dad or mum. That was incredibly difficult for him but after he married my mum he tried to be the dad he never had to my sister and me.

When our kids were little, when father's or mother's day came around one of them was bound to say, "When's kids day??" Of course, I told them that every day was kid's day. I love children - their sense of wonder, their frequent laughter, and even their mischievousness.

I thought today I would post a few funnies from the kids of this world ... enjoy!

Kid's Doctrine - taken straight from Sunday Schools around the world:

Absolutely gorgeous, Mark. Out of the mouths of babes!! Thank you for making my sad morning, much happier! God bless you and Nicole.

Oh, I am glad you enjoyed it, Carol! Laughter can sometimes be good medicine.

Praying for grace, courage and comfort for you today.

Had a good giggle. Thanks.

Thank you for sharing your heart and humour. Always love reading your inspiring blog posts. Heard these before in Pt. 1 and Pt. 2, but gave me a chuckle once again. Absolultely love the children. I totally agree with them. It's only fair they have a kid's day. Yes, kid's day is everyday but, Mother's and Father's Day is everyday too :) When my eldest son was aged 4, he came running out of his room, one night, yelling in distress, "Mum, there's an elephant in my room and he wants to trunk me!" Going to investigate, to reassure my son that he was safe, I located a little black cricket making sounds and when I showed him he happily went back to bed :) AAaah children, they grow up so quickly! Next grandchildren come to add joy and delight.

Thanks Marija - always appreciate your comments and encouragement.