Is Our View of Retirement Still Working?
NEW Book Release: "How to Avoid Burnout: Five Habits of Healthy Living" 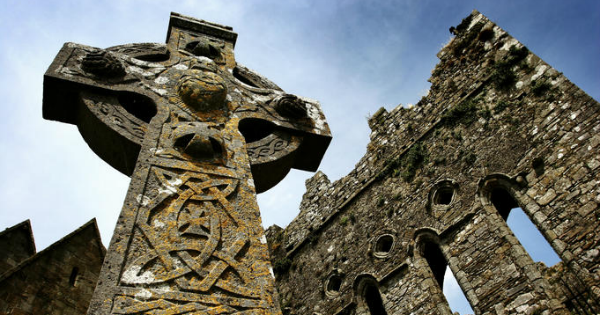 Have you ever heard of 'Celtic Christianity' or 'Celtic spirituality'?

It refers to the form of Christian faith that existed among the Celtic-speaking people of Scotland, England, Ireland and Wales during the Early Middle Ages. Although, we don't know everything we'd like to know about these people, we can glean much from their writings and the historical narrative of their era.

People of faith today often live with a tension between seeking influence in a time when the church's reputation has been severely damaged by leadership scandals and perceived irrelevance while acknowledging the need for renewal and a return to spiritual roots. Christianity is an ancient future faith and going back often seems vital to moving forward. Hence, the desire of many to re-discover the Bible afresh and to visit places where God has been at work in unique ways in the past. This includes pilgrimages to Israel, visits to the sites of the 7 churches from the book of Revelation (found in modern-day Turkey and Greece), Reformation tours, and visits to other places of historical significance.

The world of the long-ago Celts appeals to many of us in the twenty-first century. Places relevant to this era of Celtic Christianity include:

The Celts were a people of prayer and praise, integrating prayer and song into the daily rhythm and rituals of their life. They believed that there is no place that God is not. Everything is connected. Their fresh and lively spiritual disciplines are relevant to spiritual pilgrims today.

Celtic Christianity is known for its deep love and connection with nature and God's creation. The created order, from the smallest particle to the furthest star, is recognised as an active agent of God's goodness and mercy. The Celts believed in "thin places" where they sensed the supernatural world.

Although the faith of the Celts was not uniform in expression, they lived naturally and comfortably within the local community. The way they lived their lives attracted many people, resulting in Ireland converting from paganism to Christianity in a remarkably short period of time. It then proceeded to send missionaries throughout Europe. They had a unique ability to work with the beliefs of those they reached out to with the love of Jesus and to adapt worship and church life to the indigenous patterns they encountered.

Ireland played the central role in maintaining European culture when the dark ages settled on Europe in the fifth century. It became 'the isle of saints and scholars' enabling the classical and religious heritage to be saved. They honored their poets, singers, and artists, seeing the presence of God made visible through artistic impressions, manuscripts, lyrical prayers and high cross carvings.

In May 2019, Nicole and I will be leading a tour of the UK with Mission Travel called Ancient Pathways of Celtic Christianity. We will journey through Scotland, England and Ireland to discover the ancient pathways of Celtic Christianity. We will make our way to the early monastic sites of Iona, Lindisfarne and sites in Ireland such as Monasterboice and Glendalough learning of the early ways of the Saints such as St Patrick, St Columba, St Brigid and Cuthbert.

We are privileged to hear lectures from:

Check out the Mission Travel website for the all the details and information.

You are welcome to join us! Numbers are limited so register soon.

Here are some books I have read or am reading that may be of interest to you should you desire to dig a little deeper into this ancient world of faith:

Hi Mark - Very Interesting how far back Christianity goes in the Celtic Region. Guessing the first christians were of Roman Catholic ? Thought Celtic was from Northern Spain and migrated to Ireland as there traditions are almost the same - costume dress and dance between the swords - Those very first missionaries would have found it tough - Thanks for Sharing Ernie

Wow Mark! This sounds awesome! As a patchworker I’m quite interested in the history behind Celtic Knots. Do you have any references regards their spiritual significance please? All the best for the trip!

Very interesting Blog, Mark. Hope you and Nicole have a wonderful trip - I'm sure it will be fascinating and mind-blowing. Keep up the good work please. God bless you both.

Thanks a lot, Carol!

I am definitely student, not an expert, in this area!

Yes, the 'official' church during this time was the Roman one, endorsed by Emperor Constantine. Although, there were similarities, my understanding is that the Christian Celts differed in some key areas and sought to keep a vibrant spirituality to their faith while seeking to avoid the downsides of institutionalisation.

St Patrick's story of returning Ireland where he had been enslaved and reaching out to to those people is quite inspiring.

Nice to hear from you, Jeanette.

I'm not up on all the symbolism of the Celts but like you I am interested. I know St Patrick took the Irish people's approach to the 3 leaf lucky clover and used it to refer to the Trinity.

Here is an interesting article you might find helpful: https://www.celtic-weddingrings.com/trinity-knot-meaning

Let me know if you find anything else!

Lindisfarne was established when?? Not 6 AD!

Many have traveled this journey .... there is much music re-tracing Celtic Spirituality which might help others towards this journey. John Michael Talbot's music has been my journey. There is also a history of the Celtic church preserving the faith through the Dark Ages, with a trail of Celtic crosses re-populating Europe ... one can trace the archeology of the Faith spreading back across Europe from the British Isles as the second missionary journey re-evangelised Europe from Ireland/Scotland (the first being the original evangelical spread, from Paul onwards). Os Guinness teaches on this, encouraging the third evangelisation of Europe, as it is now desperately needed..

I would love to join this trip, though it is not timely for this guy.

Thanks for the typo pickup too - 6th Century AD!

Wish you could join us.

John Michael Talbot - that's a name I haven't heard in years, since I lived in the USA in the early 1980s.