The Christian God exists eternally in a Trinity of loving relationships – Father, Son, and Spirit. God created us as the object of his love and invites us to participate in a community of loving friendships. As we fully understand how much God loves us, we are able to love others from a strong foundation of acceptance, significance, security, and purpose.

A Community Characterised by Forgiveness
Because of sin, loving others is not always easy. In fact, sometimes it is awkward. This is especially so when people act in ways that offend or cause hurt to us. Situations such as these provide an opportunity for us to obey God’s command for us to forgive others. When teaching his disciples to pray, Jesus told them to pray for forgiveness for their own sins while also ensuring that they had forgiven others. Failure to forgive others affects God’s forgiveness of us (Matthew 6:9-15). Jesus went so far as to tell his followers to love their enemies (Luke 6:35-36). When giving instructions about his new community, the church, he emphasised the need for avoiding retribution and acting in mercy to forgive those who cause offense (Matthew 18:21-35). Jesus modeled his own teaching on the cross as he chose to forgive those who crucified him (Luke 23:32-34). The apostle Paul frequently affirmed the importance of forgiveness in his letters (Romans 12:16-21. Ephesians 4:31-32. Colossians 2:12-13).

Opportunities to Forgive
Have you ever been hurt by someone else? The truth is that everybody has been hurt by other people - many times, either intentionally or unintentionally. Inevitably, someone will step on your toes or ruffle your feathers (Luke 17:1). Hurt can come in the form of words (lack of kindness, unfair criticism, harshness, gossip or conflicts), unmet expectations (unfulfilled promises, disappointment, abandonment, rejection, injustice or lack of appreciation) or even physical abuse.

It’s not wrong to hurt. Pain and hurt are part of this life. They will come our way at some time or another - often beyond our control. We are all victims of sin in this world and we all carry its scars. Even the Biblical narrative frequently affirms this. Consider Josephs’ betrayal by his brothers and Jesus’ betrayal by Judas as two well-known examples.

When we are hurt, we have two options. Our first and natural response is often one of anger, bitterness, resentment, hatred or even revenge. We want to make the perpetrator pay. Unfortunately, this type of response stops the healing process, which results in dramatic effects on us physically, emotionally, relationally and spiritually. God did not intend for us to live with the destructive poison of bitterness on the inside of us. Lack of forgiveness destroys us, it takes away our joy, and it can give the devil a “foothold” or access point into our life (Ephesians 4:27).

The second possible response (the one God requires of us) is to forgive. To forgive means to let go, to pardon, to give up the right to revenge, to give up the desire to punish or get even, and to surrender our right to hurt the person back. We surrender vengeance and justice to God. We are called to forgive when someone repents and asks for it and even when they don’t, as Jesus did.

We are commanded to forgive, not just because it keeps us free from a tormenting prison of resentment, but also because God has fully forgiven us. We simply pass on the mercy and grace that we have so liberally received. Because we realize that we have been forgiven a debt that we could never repay, we are obligated to forgive others when they sin against us.

1. “Is it wrong to be angry?” It is not necessarily sinful to feel angry. Anger is a warning system alerting us that something is wrong and needs our attention. The key is to not convert angry emotions into angry behavior. Allow your emotions to settle down then seek to address the situation calmly and seek a resolution. Make use of prayer and wise counsel.

2. “Is forgiveness conditional or unconditional?” Jesus commands us to forgive others whether or not they ask for it. We choose to have a forgiving approach to people, releasing them from our right to hurt them back. Whether they are forgiven or not will depend upon their own choices and responses. God holds each person accountable for his or her actions.

3. “Is forgiveness the same as reconciliation?” No, it is not. For reconciliation to take place, there has to be appropriate apologies and a rebuilding of the relationship, which requires an effort from both parties. You may never be reconciled to your enemy.

4. “Should I stay in an abusive relationship?” Abuse of any kind is contrary to God’s commands about loving relationships. Sometimes withdrawal or at least separation from a threatening relationship is necessary to protect your own well-being. Also, forgiveness does not mean that an offender is free from the consequences of their actions, especially if there are legal or criminal aspects to a situation.

5. “What about confrontation?” Choosing to be forgiving of others does not mean that we do not appropriately confront them about issues in a relationship. We are called to “speak the truth in love” and this means being appropriately assertive about our feelings.

6. “Do I have to forgive and forget?” Forgiveness does not require forgetting about an offense. Forgiving offenses doesn't remove the memory of the hurt but it is a vital part of a healing process that can remove the sting of the offense over time.

7. “If I forgive, what about the consequences for the offender?” Forgiveness does not necessarily mean there are no consequences for an offence.  For example, in serious situations, legal consequences are sometimes necessary.  Consequences have a protective, corrective and even restorative function.  Through forgiveness we release those who have offended us from a personal desire for punitive retribution.  However, while expressing forgiveness for past offences, it may still be necessary to protect the victim and society from further harm. 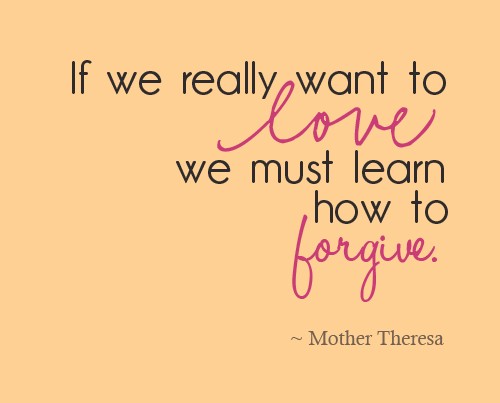 Response
Have you been hurt? You have a choice – hold on to it or release it to God. Ask God to give you his grace so that no root of bitterness establishes itself within your heart (Hebrews 12:15).

Believe that your act of forgiveness will release divine power into your life and into the situation. This is not about feelings. Forgiveness is an act of our will in response to God’s command. Because God has forgiven us we choose to forgive others. In fact, we can use other people’s hurts as a means of showing them Christ’s love. Ask God to give you a greater concern for a person after they have offended you than you had for them beforehand. Imagine the impact of a community of people willing to forgive as Christ has forgiven us.

1. Think about a time when someone really offended or hurt you. What happened and how did you feel? What has happened since?

2. How can we constructively handle and respond to angry emotions within ourselves?

3. Reflect on the difference between forgiveness and reconciliation.

4. What are some steps we can take to become more grace-giving and forgiving people?

Next: The Priority of Love (Part 5) - Tough Love