The Great Unknown
The Finish Line

What Would Jesus Say to Santa Claus?

It's hard to believe we are just 10 sleeps away from Christmas!

I really enjoy the Christmas season. It's a time to enjoy family and friends, way too much delicious food, some time off and a reminder of God's greatest gift to our world - Jesus Christ. Of course, most followers of Jesus know that Jesus probably wasn't born on 25th December. No shepherd worth their salt would have their sheep out in the fields in the northern hemisphere at that time of year! And we know that Christmas has a lot of trappings that had nothing to do with Jesus' arrival over 2,000 years ago.

In reality, the early Christians borrowed a pagan festival from the Roman Empire and added new meaning to it. I guess in some ways we could say that today the pagans are returning the favour, as much of the Western World seems intent on removing anything 'Christian' from Christmas, with nativity scenes and some Christmas carols being banned.

Over the years, I've written many posts about Christmas. One of the most popular was from a message I gave back in 2008 entitled "What would Jesus say to Santa Claus?" I thought I'd re-post it this year for your enjoyment. 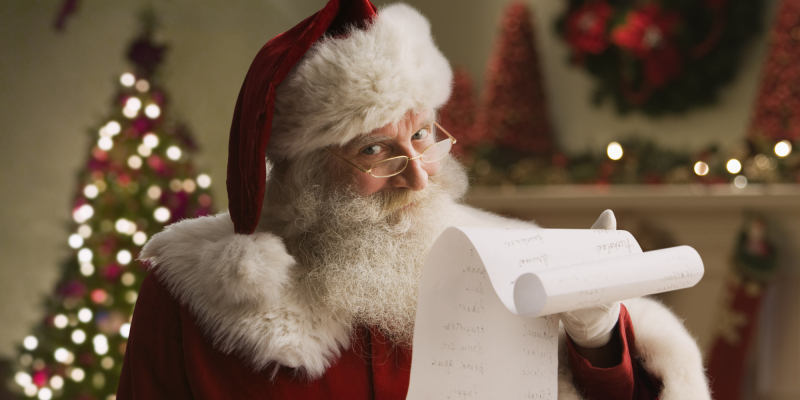 What Would Jesus Say to Santa Claus?

Have you noticed that Santa Claus has gradually been taking centre stage at Christmas of late and that Jesus has been forced to take more of a back seat? Who is this Santa guy and where did he come from?

Christmas is the most widely celebrated holiday in Western world. It was Pope Gregory that established 25th December as the supposed birth of Christ. "Christmas" literally means "mass of Christ". Christians after the time of Constantine converted a number of pagan festivals, adding Christian elements to them. To the December winter solace and various harvest festivities, they added a nativity crib and the singing of Christmas carols. Eventually, the Santa Claus image emerged - with sled, reindeer, and a sack of toys. It was an American invention that first appeared in a 1868 drawing. However, the Father Christmas legend was based somewhat on a fourth century bishop by the name of Saint Nicholas.

So anyway ... what would Jesus say to Santa Claus? Here's what I think he might say ...

1. "Thanks for encouraging the spirit of giving." Yes, I think Jesus would have something positive to say to Santa Claus. We live in a world of increasing selfishness. Christmas is a time when we think more about others, which is a good thing. The world becomes a better place when we adopt more of a giving attitude in life, as well as one of gratitude, affirmation, and encouragement.

2. "True fulfilment is not found in things." Santa’s focus at this time of year is based on a belief that more things will make people happier. But people need more than mere things. Things may be nice but ultimately they never fully satisfy. What we really need is the love, peace, and joy that only God can provide through a relationship with him and with other people. Let's "love people and use things" - not the other way around.

3. "Good works aren't enough." Santa's philosophy in life is one of being rewarded for what you do - for being nice rather than naughty. The truth is that none of us are ever good enough. All our efforts fall short. That's why Jesus came - to live and then to die for our short-comings ... and then to offer us eternal life ... as a free git, not as a reward for our good deeds. Christmas is not about what we have done but about what God has done for us ... in Christ.

4. "You're not the reason for the season." Christmas is about Christ. Jesus came to earth as the Saviour of world. He is the eternal Son of God who arrived on earth 2,000 years ago. Santa Claus is a recent addition, an add on. This celebration isn’t about him. Jesus Christ is the most influential person in history. We mark time by his very arrival. Jesus is the "hinge of history". Let's keep the "Christ" in Christmas. Remember, HE is the real reason for season!

5. [Spoiler ALERT!] "You're not real, but I am." Santa Claus is a figment of people’s imagination, a mythical hero. Sorry kids, but Santa isn’t real (parents, ease it to them slowly!). He's merely a character - like Mickey Mouse or Buzz Light Year. Jesus is real. You can’t see him but he is alive. He is not a myth or a legend or an imaginary person. He is not only real, but he’ll be back. However, his second coming won't be like his first coming. He will come in power and glory and every eye will see him.

Can you see that the Gospel of Jesus is quite different than gospel of Santa Claus? Where is the focus of our faith today? In Santa Claus or Jesus Christ? Jesus is knocking at door of each person's heart. Do we have room for Jesus? I believe that he is the true and living God, the Prince of Peace, the Saviour of the world, offering us forgiveness and real life. Let's turn to him and place our faith in him today. Let's follow him and live for him.

Christians: don't picket Santa Claus! Don't become an old scrooge or a humbug Christian. Just because Santa is an anagram for Satan doesn't mean that he is the devil incarnate! Jesus Christ is the true meaning of Christmas. Let's bring him back to centre stage!

P.S. For background on the concept of "What Would Jesus Say ..." see this previous post.