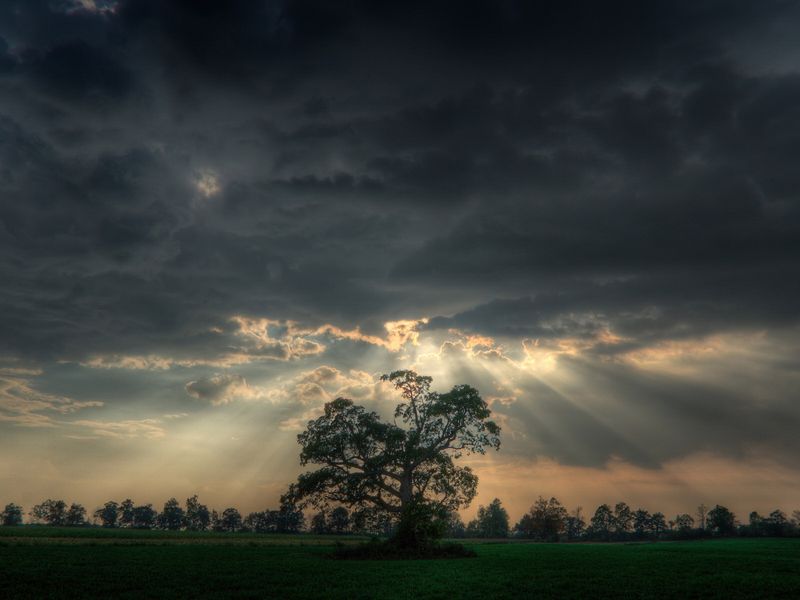 God did not create the world “bad”.

God did not create the world the way it is today. When the world was created it was “good” (Gen.1-2). There was no pain or suffering. It was a paradise. But man rebelled against God’s commands and sin came into the world. We now live in a damaged, fallen and sinful world where things are not as they should be. Evil, injustice and wickedness are very much alive. This is a fact of life and not to be confused with the acts of God.

Can we blame God for all the evil in the world? Did He create it? Is He the cause of it? And if not, why does He allow it to happen? Why doesn’t He stop it? God created us with a free will – the ability to choose to do good or evil. Unfortunately, sometimes people do make bad choices and the result is unfair to us, but in spite of this unfairness, God is still good. Much pain and suffering is caused by the bad choices that people make.

Yes, God is sovereign and ultimately able to overrule anything. Job saw that ultimately it was God who had “taken away” (Job.1:21) and he simply placed his trust in God. He saw his human enemies and the forces of nature as secondary and subordinate to the sovereign God who was ultimately responsible.

Job believed that his life was under the sovereign rule of God and that nothing happened to him by accident, fate or chance. His controlled response exemplifies a strong faith in the midst of crisis.

Job’s surrender to God’s will is exemplary, especially considering he has done nothing wrong or at least bad enough to deserve what is happening to him. Instead of cursing God, Job praised Him! Job sees that God is to be blessed, not just for giving blessings, but for who He is as God. He praised God’s name in sorrow as well as blessing and looked to Him as the source of his help and strength. In all this, Job did not charge God with wrong – any unseemly or vengeful act; an action contrary to his holy name (Job 1:22).

Such a mature response requires a belief system that has allowed for the possibility of tragedy, well before it actually happened. Job lived a life of total surrender to the sovereignty of God, not in passive fatalism, but in active trust.

Job believes that it is equally right for God to send “good” or “evil”. The Hebrew meaning of the word “evil” is anything “bad”, not “wicked”. Job’s faith is strong enough to accept the good and the bad from the hand of God. He knows that he must express his trust in God, regardless of the circumstances he experiences.

Job’s response is not just some “passionless rationality”. Job made a decision to co-operate with God rather than just passively submit to what had happened. The verb “accept” describes a positive participation in what God decrees, not just passive reception. Anderson says, this is “active word, implying co-operation with Providence, not mere submission”. Job is totally submitted to God for good or bad.

Job realizes that at times the wicked prosper and the righteous are not blessed (Job 21:7-34). Unlike Job, his friends have no theology for bad things happening to good people. They have a simple formula of sowing and immediate reaping, with no allowance for delay or momentary contradictions.

Ultimately, God is in control of our lives. Nothing happens to us by accident or chance. Nothing happens to us without God being aware of it and allowing it to happen. Our lives are not subject to fate but are in the hand of God and His design for our lives, whether that includes things good or bad. A strong belief in God’s sovereignty helps us endure during times of calamity.