God Sent You to Finish the Race 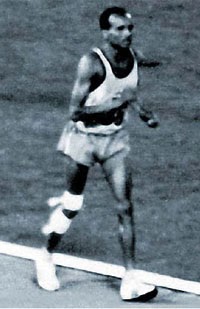 The last of the Olympic marathon runners were being assisted away to first-aid stations. Over an hour earlier, Mamo Waldi of Ethiopia had charged across the finish line, winning the 26-mile, 385-yard race looking as strong and as vigorous as when he'd started.

As the last few thousand spectators began preparing to leave, they heard police sirens and whistles through the gate entering the stadium.

The attention turned to that gate. A sole figure, wearing the colours of Tanzania, came limping into the stadium. His name was John Steven Aquari. He was the last man to finish the marathon in 1968. His leg was bandaged, bloody. He had taken a bad fall early in the race. Now, it was all he could do to limp his way around the track. The crowd stood and applauded as he completed that last lap.

When he finally crossed the finish line, one man dared ask the question all were wondering. "You are badly injured. Why didn't you quit? Why didn't you give up?"

Aquari, with quiet dignity said, "My country did not send me seven thousand miles to start this race. My country sent me to finish."

Posted at 05:00 AM in Biographies, Quotes | Permalink