2015 Australian Christian Book of the Year

Entries are read and judged by a panel selected by the SparkLit Council. 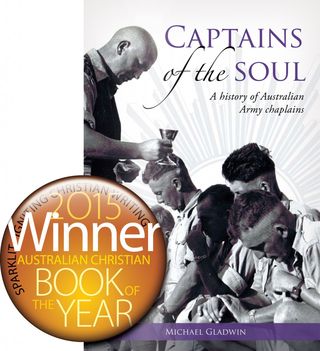 Captains of the Soul: A History of Australian Army Chaplains by Michael Gladwin

The letters and journals of both chaplains and soldiers animate this account of the work of chaplains in every theatre of war involving Australian troops. While the role of the chaplain has changed over time, the common task remains the ministry of God’s Word and the sacraments to soldiers, burying the dead and representing an alternative reality to the conflict, chaos and suffering. Increasingly unfashionable in some spheres of society, chaplains continue to be valued in proportion to the proximity of battle. Gladwin does not flinch from portraying chaplains who behaved disgracefully nor from facing up to the problem of fatalism amongst some Australian troops. However, acts of heroism by ‘the soldier without a gun’ abound and provide Christian communicators with a treasury of inspiring, home-grown stories. This is a history of national importance and an insight into the Australian character.

To read about the other eight books short-listed, visit sparklit.org