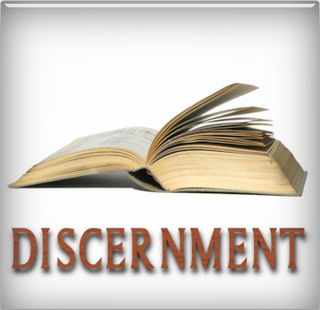 Most followers of Christ understand the need to pursue truth and avoid error. Some take it upon themselves to find error and point it out to others. Most churches I know have a statement of faith and their teaching teams speak from this foundation. They believe that the Bible is inspired by God and is authoritative in matters of belief and practice.

From time to time, I noticed that one of our teaching team may quote someone in a message and it raises questions from a listener or congregation member. This can lead to some interesting conversations. In one such recent dialogue, I raised three questions:

1. "If a person quotes someone else, does that mean that they endorse everything else that person has said?"

2. "If you disagree with a person in one area, does that mean that everything else they say is invalid or not worth listening to?”

3. “Are you comfortable being in a church where diversity of belief around various debatable theological matters is okay?”

A few brief comments about these questions:

Question 1 - "If a person quotes someone else, does that mean that they endorse everything else that person has said?"

The logical answer is ‘no’. The apostle Paul quoted Cretan poets in his letter to Titus (Titus 1:12) and Greek philosophers in his speech at Athens (Acts 17:28). By doing so, he was not endorsing everything else they said or believed. In addition, he did not feel the need to pause and say, "By the way, let me tell you everything about this person that I disagree with." He used these quotes because they were true and because he believed that they would assist him in connecting with his audience and building his message, which was always aimed at lifting up Jesus and promoting the good news he had come to bring.

For some people, however, it seems that the answer to this question is ‘yes’. They go down rabbit holes to discover everything the person quoted believes or has said and then by abstraction declare that the speaker has promoted error. It’s actually not a logical argument.

Paradoxically, in a recent conversation with a person, they quoted a statement by John MacArthur to me. I paused and then asked them whether they knew that MacArthur ran a conference last year called "Strange Fire" in which he stated that the charismatic movement was demonic. I asked the person whether by quoting MacArthur they were supporting this anti-Pentecostal sentiment. Silence. No answer.

Question 2 - "If you disagree with a person in one area, does that mean that everything else they say is invalid or not worth listening to?”

The logical answer is ‘no’. For example, the best selling book The 7 Habits of Highly Successful People is one of the best life management books ever written. Yet some people have told me we shouldn't read it because the author, Stephen Covey, was a Mormon. If your math teacher wasn't a Christian, could you not learn something from them? Another example: People such as Billy Graham and Bill Hybels are not Pentecostal like I am, but I have gleaned so much from them as followers of Christ. In fact, when I chaired the Willow Creek Association here in Australia for 5 years, I was always amazed at how few Pentecostal church leaders would come and hear from Bill Hybels. He has one of the most outstanding leadership and evangelistic gifts in our generation.

Unfortunately, some people believe that if they disagree with someone in one area, his or her entire life/teaching is not worth engaging with. I find this very sad.

An analogy I have used for years is that listening to sermons or lectures or reading a book is a bit like eating fish. You eat the fish but spit out the bones in the process. Very few things you hear are pure fillet. Just don't throw out the entire fish!

Question 3 - “Are you comfortable being in a church where diversity of belief around various debatable theological matters is okay?”

For me, the answer is ‘yes’. We have a clear set of beliefs but we allow diversity around a whole range of issues, mostly matters of biblical interpretation. However, for some people, this is not something they are comfortable with. They are looking for clear 'black and white' answers and strong promotion from the pulpit on a whole range of theological issues.

For instance, in our ORIGINS series a few years ago, we talked about creation. The author of Genesis clearly tells us 'who' created the world and 'why'. They do not tell us 'when' or 'how' the world was created. That was not their intent. When it comes to these last two questions, there are a variety of views in the Christian church today, including young earth creationism, old earth creationism and theistic evolution (see my BLOG post on Creation). I believe that God created the world but we don't have an official stance on how old the earth is. We are comfortable with this diversity and see it as a strength.

When it came to disputable matters, such as eating meat, Paul did not seek to create 'meat-eating churches' and 'non-meat eating churches'. He urged people to form their own convictions then learn to live peacefully and respectfully with others who differ. We seek to do the same. Obviously, not everyone finds that comfortable.

Let me pull this post together with a final example. There are different views of the meaning of the 'atonement' and the work that Jesus did on the cross (see my BLOG post on Why Did Jesus Die?). 'Substitutionary atonement' is one such common view. It suggests that God is angry because of the world's sin but he chose to take his anger out on his Son, killing him instead of us. No doubt, there is truth in this but this view, pushed to an extreme, can make God out to be some sort of 'cosmic child abuser', which is not a true representation of the heart and character of God. A variety of theologians are thinking and writing about this, so in my recommended reading list, I suggested a few books. Firstly, The Nature of Atonement: Four Views by editors James Beilby and Paul Eddy, and then A Community Called Atonement by Scot McKnight. I also included the book Stricken by God: Non-Violent Identification and the Victory of Christ edited by Brad Jersak and Michael Hardin. This latter book is a compilation of articles by a wide range of authors speaking into this important debate. By doing so, I am not promoting everything every author included in this book has ever said or believes. For instance, Marcus Borg, who died recently, was a liberal theologian who did not believe in the literal resurrection of Jesus. I do believe in the literal resurrection of Jesus and therefore I would disagree with him on that issue. Hopefully, most people would know this because we talk about the resurrection of Jesus regularly in our messages. So, I am not, by some sort of abstraction, promoting disbelief in the resurrection by including this book on the reading list. However, I am saying that if you want to have a good think about the different views of the atonement, taking these perspectives into consideration is part of a robust process of study and reflection. That's all. Every serious theological student would understand the need for this.

Yes, let's be like the people of Berea who checked out what Paul was saying with the Scriptures (Acts 17:11). But let's avoid moving from discernment to judgment (see my BLOG posts on Heretic Hunting and Discern Don't Judge). Let's not become 'theological police' or 'heretic hunters'! Remember, we all "know in part" (see my BLOG post on The Joy of Not Knowing it All). None of us knows everything, so we need to always have an attitude of humility that is open to learn, even from our critics and/or those who see things differently than we do. Our teaching team welcomes feedback and are always happy to answer any questions or clarify any misunderstandings. We want to continue to grow in our ability to communicate God's truth in a way that changes lives through the power of the Holy Spirit.

My dad used to say, "We can be right in our doctrine and wrong in our attitude and we are wrong." Love, how we treat people, is of utmost importance (1 Corinthians 13).

P.S. For further reading, check out Across the Spectrum: Understanding Issues in Evangelical Theology where author Gregory Boyd shows the range of Christian beliefs (each believing they have the correct interpretation!) on matters such as: inspiration, providence, foreknowledge, creation, the divine image, atonement, salvation, sanctification, eternal security, the destiny of the un-evangelised, the Lord's Supper, baptism, charismatic gifts, women in ministry, the millennium and hell.

Posted at 06:19 AM in Current Issues, Preaching, Theology | Permalink