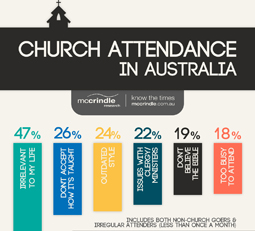 Australia has more churches (13,000) than schools (9,500), and more Australians attend a church service each week (1.8 million) than there are people in South Australia (1.6 million).

And while the latest Census results show that Christianity is the religion with which most Australians identify (61.1%), well above the second most popular religion in Australia, Buddhism (2.5%), less than one in seven of the Australians who ticked “Christianity” on their census form regularly attend a church.

Easter is a time of the year when church attendance increases, but what do the 92% of Australians who are not regular church attendees think of churches, and churchgoing in 2013? Check out Mark McCrindle's recent BLOG post for the latest infographic which shares the data, as well as additional information about perceived community needs.

Posted at 05:33 AM in Church, Contemporary Culture | Permalink