What do Protestants think of Pope Francis? 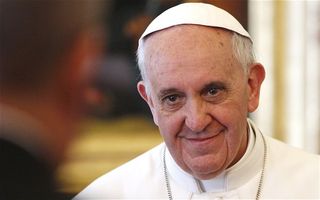 A recent article from the Barna Group:

March 18, 2014 — He was the most talked-about person of 2013 and winner of TIME’s “Person of the Year” award. Google Translate coders have set his name to translate as “a better world.” Yet Pope Francis insists that he is “a normal person,” and has no desire to be “a superman or a star.”

Some religion columnists and commentators attribute the public’s esteem to his humble insistence that he is ordinary. In fact, humility may just be the pontiff’s paradoxical trademark. The Washington Postsummed it up in one headline: “Like Pope Francis? You’ll Love Jesus.” The Post is not alone in pointing out that the pope’s actions, words and demeanor are often reminiscent of the Jesus portrayed in the Gospels. Humility may be exactly the kind of “ordinary” Pope Francis hopes will become the norm among all of those who claim to follow Christ.

It’s widely accepted that Catholics love the Holy Father, but what about people of other traditions? Some have called Francis a pope for Protestants or for Millennials, but what do these groups actually think of him? And if his influence is so far-reaching, what has been the impact of the so-called “Pope Effect,” one year into his papacy?

A new study conducted in late February 2014 by Barna Group examines the impact of the new leader of the Catholic Church on the U.S. population, including the nearly half of Americans who identify as Protestants.

The World’s Most Well-Known Religious Leader
Just last March white smoke billowed above St. Peter’s Square and then-Cardinal Jorge Bergoglio became Pope Francis I, head of the Roman Catholic Church and leader of the world’s 1.2 billion Catholics. In a single year, Pope Francis has become the most well-known religious leader in ministry today.

Of all U.S. adults surveyed, 62% say they are somewhat or very familiar with the pontiff. Not surprisingly, Catholics take the lead at 99%. Among practicing Protestants, 58% say they have a working familiarity with the pope.

Second to Pope Francis is Billy Graham, the famed evangelist who has been in public ministry for 65 years. Sixty percent of adults say they are familiar with Rev. Graham. The third-most well-known religious leader is the Dalai Lama; just under half of all adults (49%) say are somewhat or very familiar with him.

Popularity, Power and Public Critique
Familiarity is, of course, not the same as favorability—but Pope Francis receives positive marks among a majority of U.S. adults (54%). About one-quarter (26%) say their opinion of the pontiff is neutral, less than one in 10 (7%) view him unfavorably and 14% say they don’t know enough to have an opinion. More than half of all adults (54%) say Pope Francis is an improvement on his predecessor (among practicing Catholics, it’s a two-thirds majority). When asked to identify how well certain words describe the current pope, nearly nine out of 10 Americans say he is very or somewhat honest (87%), compassionate (88%) and intelligent (86%).

On a generational scale, positive views of the pope increase among older adults. While only 41% of Millennials see him in a positive light, favorability is higher among Busters, also called Gen-Xers (51%), and Boomers (63%). The generation most favorable toward the pontiff is the cohort to which Pope Francis belongs: the Elders, two-thirds of whom view him favorably (66%).

But what about dissenters? The largest demographic to express negative views is practicing non-mainline Protestants, one-quarter (26%) of whom feel somewhat or very unfavorable toward the pope. Specific critiques of Pope Francis range from descriptions of him as out of touch (22%) to the more serious allegation that he is corrupt (17%). While he has sometimes been cast as the pope for faith-jaded Millennials, young adults are notably skeptical about the pontiff’s integrity: 37% say he is somewhat or very corrupt, more than twice the national average.

Adults are evenly split on whether Pope Francis—often billed by the media as progressive compared to former pontiffs—is too liberal (27%) or too conservative (27%) on social issues. Four in 10 adults (39%) believe the pope is too powerful.

These critiques uncover some notable denominational and generational differences. For example, just 8% of practicing Catholics say the pope is either somewhat or very corrupt, while 22% of practicing Protestants say so. The leading groups to disapprove of the pope as too liberal include non-mainline Protestants (51%) and, perhaps surprisingly, Millennials (36%). On the opposite end of the spectrum, those most at odds with Pope Francis as being too conservative on social issues are also non-mainline Protestants (30%) and Millennials (38%).