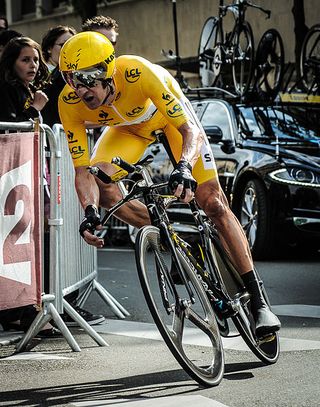 In 2010, Dave Brailsford faced a tough job. No British cyclist had ever won the Tour de France, but as the new General Manager and Performance Director for Team Sky (Great Britain's professional cycling team), that's what Brailsford was asked to do.
His approach was simple.
Brailsford believed in a concept that he referred to as the "aggregation of marginal gains." He explained it as the "1 percent margin for improvement in everything you do." His belief was that if you improved every area related to cycling by just 1 percent, then those small gains would add up to remarkable improvement.
They started by optimizing the things you might expect: the nutrition of riders, their weekly training program, the ergonomics of the bike seat, and the weight of the tires. But Brailsford and his team didn't stop there. They searched for 1 percent improvements in tiny areas that were overlooked by almost everyone else: discovering the pillow that offered the best sleep and taking it with them to hotels, testing for the most effective type of massage gel, and teaching riders the best way to wash their hands to avoid infection. They searched for 1 percent improvements everywhere.
Brailsford believed that if they could successfully execute this strategy, then Team Sky would be in a position to win the Tour de France in five years time.
He was wrong. They won it in three years.
In 2012, Team Sky rider Sir Bradley Wiggins became the first British cyclist to win the Tour de France. That same year, Brailsford coached the British cycling team at the 2012 Olympic Games and dominated the competition by winning 70 percent of the gold medals available. In 2013, Team Sky repeated their feat by winning the Tour de France again, this time with rider Chris Froome. Many have referred to the British cycling feats in the Olympics and the Tour de France over the past 10 years as the most successful run in modern cycling history.
And now for the important question: what can we learn from Brailsford's approach?
The Aggregation of Marginal Gains
It's so easy to overestimate the importance of one defining moment and underestimate the value of making better decisions on a daily basis. Almost every habit that you have -- good or bad -- is the result of many small decisions over time. And yet, how easily we forget this when we want to make a change.
So often we convince ourselves that change is only meaningful if there is some large, visible outcome associated with it. Whether it is losing weight, building a business, traveling the world or any other goal, we often put pressure on ourselves to make some earth-shattering improvement that everyone will talk about.
Meanwhile, improving by just 1 percent isn't notable (and sometimes it isn't even noticeable). But it can be just as meaningful, especially in the long run.
And from what I can tell, this pattern works the same way in reverse. (An aggregation of marginal losses, in other words.) If you find yourself stuck with bad habits or poor results, it's usually not because something happened overnight. It's the sum of many small choices -- a 1 percent decline here and there -- that eventually leads to a problem. 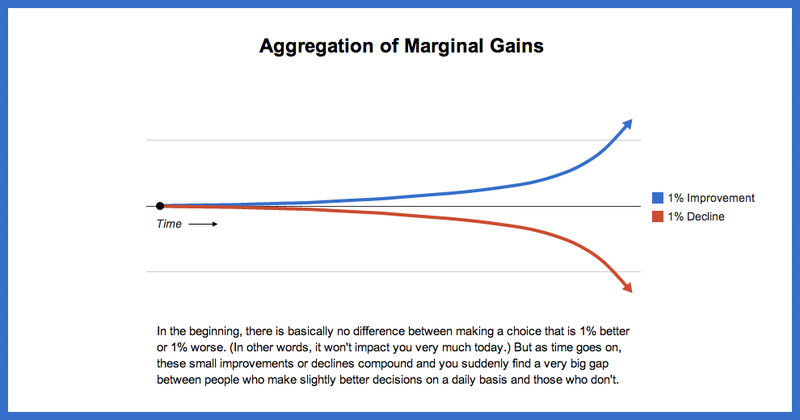 In the beginning, there is basically no difference between making a choice that is 1% better or 1% worse. (In other words, it won't impact you very much today.) But as time goes on, these small improvements or declines compound and you suddenly find a very big gap between people who make slightly better decisions on a daily basis and those who don't. This is why small choices ("I'll take a burger and fries") don't make much of a difference at the time, but add up over the long-term.
On a related note, this is why I love setting a schedule for important things, planning for failure, and using the "never miss twice" rule. I know that it's not a big deal if I make a mistake or slip up on a habit every now and then. It's the compound effect of never getting back on track that causes problems. By setting a schedule to never miss twice, you can prevent simple errors from snowballing out of control.
The Bottom Line
Success is a few simple disciplines, practiced every day; while failure is simply a few errors in judgment, repeated every day. Jim Rohn
You probably won't find yourself in the Tour de France anytime soon, but the concept of aggregating marginal gains can be useful all the same.
Most people love to talk about success (and life in general) as an event. We talk about losing 50 pounds or building a successful business or winning the Tour de France as if they are events. But the truth is that most of the significant things in life aren't stand-alone events, but rather the sum of all the moments when we chose to do things 1 percent better or 1 percent worse. Aggregating these marginal gains makes a difference.
There is power in small wins and slow gains. This is why average speed yields above average results. This is why the system is greater than the goal. This is why mastering your habits is more important than achieving a certain outcome.
Where are the 1 percent improvements in your life?
[Source: James Clear]