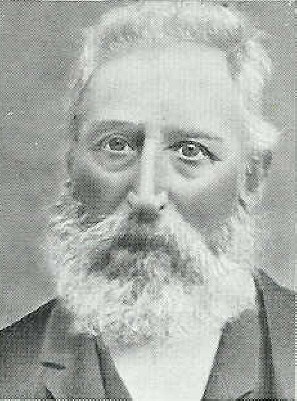 Did you hear? Yesterday was World Beard Day! Yes, the first Saturday of September is the official day to celebrate great facial hair. This is timely for me, as I returned from my recent holiday sporting a beard that ties me to my Scottish roots (see picture to the right of my great, great grandfather William Michael, born in Ullapool, Scotland in 1828).

* In southern Spain, many townships gather to witness a boxing match between a bearded man a beardless boy. The bearded man, normally armed with a sharp pike, is typically the victor.

* In the Swedish village of Dönskborg, anyone without a beard is banished from the town and forced to spend twenty-four hours in a nearby forest. Back in the town, the hirsute burn effigies of their clean-chinned loved ones.

* The exact origins of World Beard Day are unknown, but there is some evidence to suggest that Danish Vikings had a special day dedicated to the glorification of beards as far back as 800 AD. The event was not held on a fixed date, and was often celebrated hundreds of times each year. This early incarnation of what would one day become World Beard Day typically involved the ransacking of neighbouring towns, villages and countries by large groups of heavily-armed bearded men.

* Throughout the world, bearded communities are encouraged to acknowledge this sacred day by organising and staging their own public or private World Beard Day celebrations. These can consist of anything from a relaxing family lunch to a lavish, tax payer-funded street parade.

* Shaving on World Beard Day is universally considered to be highly disrespectful.

Of course, in the Christian church there has been plenty of controversy over beards throughout the centuries. According to Christianity Today's recent article, you're more likely to see a beard in the pulpit today than at any time since the 1800s. But beards—especially among clergy—were once serious, symbolic matters. They separated East from West during the Great Schism, priests from laity during the Middle Ages, and Protestants from Catholics during the Reformation. Some church leaders required them; others banned them. To medieval theologians, they represented both holiness and sin. But historian Giles Constable says that rules on beards sound more forceful than they really were. Clergy (especially powerful ones) were likely to follow fashion in their day, too.

On July 21, 2013, Saddleback Church hosted a contest for "Most Magnificent Beard and Most Pathetic Beard".

Let's hear it for the beard!