Religion and Politics is like Ice-Cream and Manure: They Don't Mix (Jarrod McKenna)
World Beard Day 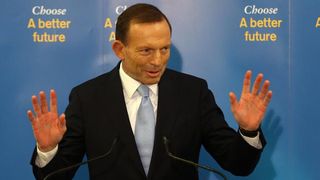 Congratulations to Mr Tony Abbott who was elected today as the next prime Minister of Australia. He succeeded Mr Kevin Rudd, who will not contest the leadership of the Labor Party. This election campaign has been somewhat of a circus, but in the end the Australian population voted, and the Coalition has taken government, with a strong swign in their favour. Results for the Senate are yet to be finalised.

Regardless of how you voted and who you voted for, now is the time to get behind our new Prime Minister and his elected government, as we move forward as a nation. Those of us who are Christians should pray earnestly and consistently for whoever is in government, regardless of our like or dislike for them or their policies. God commands us to pray for those in leadership, because of the influence they have over our world (1 Tim.2:1-6).

As a follower of Christ, I believe that God is in control. He is sovereign over all matters on earth. Ultimately, his purpose will be accomplished. He puts one leader up and takes another down. He can put it into the hearts of people to do his will. We must trust him and honor him as the God over all the earth. Our lives are not subject to luck, fate or chance. We are in the providential hands of a loving, yet holy God.

A final thought … now that we have voted, our job is not over. There's a joke that goes like this: "What takes 2 minutes and last 3-4 years? Your vote!" That's very true. However, we need to do more than just cast our vote and then forget about it until the next election. A democracy is designed to be much more than just voting people into office and paying your taxes. We need to be actively participating with our politicians (whoever they may be) as key issues arise – and voice our opinions on important matters. After all, each politician is appointed to serve the people of our nation – which includes you and me.

"When the godly are in authority, the people rejoice. But when the wicked are in power, they groan." [Proverbs 29:2. NLT]