Some thoughts on the current Asylum Seeker Issue (by Tim Costello) 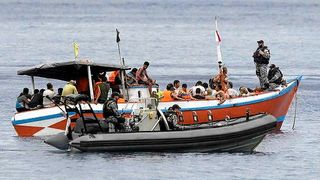 Australia's humanity is the casualty of repugnant asylum politics

The Australian philosopher Peter Singer asks students to consider whether a person wearing new shoes and a suit has a responsibility to wade into a nearby pond, thus ruining their clothes, if they see a child in that pond having difficulty swimming.

Predictably they respond that the person has a responsibility to save the child and that the cost of the shoes and suit are no reason not to act.

In other words, you either think that people have inherent dignity and worth, or not. In the eyes of the bystander, that dignity does not depend on whether you have a personal link to the child or not.

This humanist approach sits comfortably alongside my Christian ethical viewpoint - in the parable of the Good Samaritan, the help afforded a stranger did not depend on cultural or ethnic ties.

In 21st century Australia it is disheartening to think that some in mainstream politics would choose to keep walking past the pond, as the architects of evermore oppressive policies concerning asylum seekers appear to be prepared to do.

The loss of focus on human dignity in our political debate is evident in framing the contemporary argument around refugees and boat arrivals as a "problem" to be "solved".

Rather, it should concern every Australian that there are children in our detention centres who are living unhappy lives: lives behind bars, lives that were already blighted in some way by the circumstances which pushed their families from their homes, lives that are suspended.

In a democracy like Australia, politicians take their cue from what they understand to be public opinion.

So when we as a nation, as citizens, as respondents to opinion polls are either complacent about this issue or complicit in the punitive approach to asylum seekers, we have lost something that sits at the core of a decent society. How did this happen?

On the policymakers' side, the courting of political favour through the demonising of vulnerable people is undignified, repugnant and venal.

Australia is in urgent need of a change of heart.

As head of a child-focused aid and development organisation, I am continually humbled by the hospitality I receive from refugees fleeing from unimaginable violence, instability and natural calamity.

Most recently I was invited into the tents of Syrian families who had fled across the border to Jordan. As urban planners go to work in these giant refugee camps - in recognition that the prospects of peace and stability returning to Syria in the medium term are remote - displaced people have told me their stories. Their hospitality crosses cultural and religious divides, as well as the fact that I am a stranger, as they tell me about their fears for the future of their children. I have witnessed the boredom and frustration of refugee kids who simply want to be in school, because that gives them the best chance of achieving their dreams. When the hope that resides in the hearts of children is in danger of flickering out, then that is a true humanitarian emergency. And that is why I believe we stand, as a society, guilty.

We have let ourselves conflate the issues surrounding asylum seekers with any number of anxieties we face - from budget deficits to job security. The most distracting and distorting of these perceived links has been the linking of boat arrivals with security risks. This fearmongering sows the seeds of distrust and envy. It is the opposite approach of sitting down with someone and learning their story. And letting fear dominate the discourse also diminishes our way of life, and our democratic ideals. The inherent worth of human beings is just that - inherent - not subject to fashion and fickle political manipulation. This worth and dignity is denied when we as a nation ban asylum seekers from working - even in a volunteer capacity. It is holding back human industry and aspiration. It amounts to a brazen attempt to worsen the life chances of others who weren't born in this "lucky" country.

I call on all people who agree that there is inherent worth in every person, not be embarrassed to be pro-people. To see the potential in every person fleeing conflict, disaster and persecution. To respect their quest for some semblance of personal security. And to be pro-children - to support them to imagine a better future, not a life limited by incarceration.

Perhaps it's time for an honest assessment of the drivers of this fear and anxiety in our society, directed towards those who arrive via ocean. There is much anxiety over the economy, the budget, debt, jobs - if the media are any guide. It's intellectually and morally lazy to allow our fears about the economy and jobs and debt, to be projected onto human bogymen in the form of asylum seekers.

A more productive approach would be to consciously and conscientiously focus on what we've got to be hopeful about in this country, and how we can welcome those who are motivated to contribute. Our wealthy, free and culturally diverse society is something which should not be hoarded - tightly guarded, wrapped in plastic and gathering dust. It is something to be celebrated and shared.