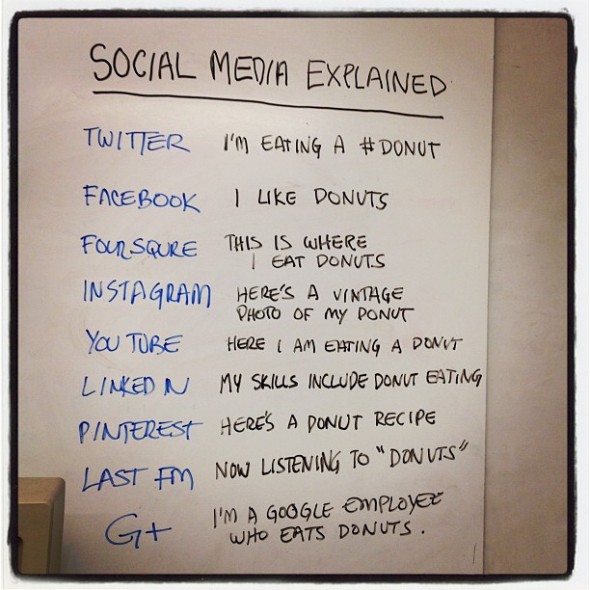 Social-media is slowly creeping into all areas of the web. Even websites and services that have no social features usually place a Facebook or Google+ like button somewhere to help spread the word of their existence. Even so, it’s quite difficult to explain to someone new to the Internet, or social aspects of the web, exactly what this social media revolution is. And just as importantly, what the difference between social media services are.

That problem has now been solved by using a donut analogy. Douglas Wray posted a whiteboard breakdown of all the major social media services and explained how they differ from each other using the example of a donut. Quite fittingly he posted the image on Instagram –the photo sharing service.

The breakdown is the clearest I have yet seen of how something like Twitter differs from Facebook or LinkedIn. Twitter is for telling people what you are doing at any given moment (eating a donut), Facebook is more for sharing what you like in general (I like donuts), and LinkedIn is for sharing what you’re good at (skilled with donuts). Yet all rely on the sharing of information in different ways to remain relevant and keep people using them.

So, the next time someone asks you what social media is, or how two services differ, save this image and pull it up on your phone. They’ll understand much more quickly and you won’t be standing there trying to find examples that work to show the differences. Alternatively, memorize the donut analogy and look clever at parties.