Tax Blues on the Increase in Australia
Happy Mother's Day!

The Power of Encouragement 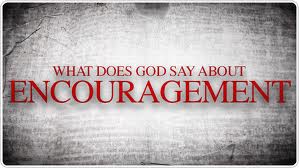 We all thrive on praise and encouragement. It motivates us and brings out the best in us. Encouragement is like oxygen to the soul. We tend to become what the most important people in their lives think we can become. Encouragement can be given in various forms – listening (Jas.1:19), empathy (Rom.12:15), comfort (2 Cor.1:3-4) and words of appreciation.

EXAMPLE 1: Paul had been ministering in Corinth with good results but also with much opposition. Jesus appears to Paul at night through a dream to encourage him.

Acts 18:9-10. One night the Lord spoke to Paul in a vision: "Do not be afraid; keep on speaking, do not be silent. For I am with you, and no one is going to attack and harm you, because I have many people in this city."  NIV

"Keep it up and don't let anyone intimidate or silence you. No matter what happens, I'm with you and no one is going to hurt you. You have no idea how many people I have on my side in this city." [The Message Bible]

Result? Paul stayed in Corinth for 18 months and established a flourishing church and reached out to the surrounding regions of Achacia (2 Cor.1:1).

EXAMPLE 2: Paul has been arrested in Jerusalem because of his witness about the Lord Jesus. There is much opposition and antagonism directed at him by the religious leaders and the Jewish people. Jesus appears again to Paul at night to encourage him.

Acts 23:11. The following night the Lord stood near Paul and said, "Take courage! As you have testified about me in Jerusalem, so you must also testify in Rome." NIV

"It's going to be all right. Everything is going to turn out for the best. You've been a good witness for me here in Jerusalem. Now you're going to be my witness in Rome!" [The Message Bible]

Result? Paul went on to preach the gospel in Rome. God preserved him from a death plot, shipwreck, imprisonment and many other difficulties. He finished his course well.

EXAMPLE 3: Paul had finally made it to Jerusalem, barely escaping losing his life and was now on the way to Rome as a prisoner on board a ship (Acts 27). Just to make things worse, they encountered very bad weather and lost a lot of time. Despite Paul's warning of further disaster, they kept sailing and were hit by a terrible storm, which caused the ship to lose control. Luke records that "it had been many days since we had seen either sun or stars. Wind and waves were battering us unmercifully and we lost all hope of rescue."

Acts 27:23-24. Last night an angel of the God whose I am and whom I serve stood beside me and said, `Do not be afraid, Paul. You must stand trial before Caesar; and God has graciously given you the lives of all who sail with you.' NIV

"Don't give up Paul. You're going to stand before Caesar yet - and everyone sailing with you is also going to make it." [The Message Bible]

As a result, Paul was able to encourage the other 276 passengers and bring them all to safety after 14 nights in the deep. Once on land, Paul was bitten by a snake but miraculously, was not harmed! The father of the main leader on the island, Publius, was sick and Paul prayed for him and he was healed. This resulted in everyone on the island who was sick coming to Paul and being healed as well as hearing the good news of Jesus Christ.

1. Life and Ministry can be both fulfilling and challenging (frustrating)!

This is a FACT! There will be times of pressure. There will be storms, obstacles and opposition. God is building His church and it involves a spiritual battle (Mt.16:18-19; 11:12). Expect it and don't let it surprise you or stop you. Get used to it but don't be afraid. Don't allow other people, opposition or difficult circumstances to intimidate you or cause you to be quiet.

Matt 16:18-20. Now I say to you that you are Peter, and upon this rock I will build my church, and all the powers of hell will not conquer it. And I will give you the keys of the Kingdom of Heaven. Whatever you lock on earth will be locked in heaven, and whatever you open on earth will be opened in heaven." NLT

Matt 11:12-13. From the days of John the Baptist until now, the kingdom of heaven has been forcefully advancing, and forceful men lay hold of it. NIV

Jesus tells Paul to keep it up. Speak and do not be silent. Don't stop. Never quit. You're doing the right thing. Keep at it. Just keep going, doing what God has told you to do. Don't give up. Don't quit. Don't throw in the towel. God is with you, so keep on going. You will make it if you just hold on.

Some things need to be continually done – over and over again.

Gal 6:9-10. Let us not become weary in doing good, for at the proper time we will reap a harvest if we do not give up. Therefore, as we have opportunity, let us do good to all people, especially to those who belong to the family of believers. NIV

1 Cor 15:58. Therefore, my dear brothers, stand firm. Let nothing move you. Always give yourselves fully to the work of the Lord, because you know that your labor in the Lord is not in vain. NIV

God wants us to have an assurance that everything will be all right! He wants us to take courage – to not fear or doubt. Though everything around you seems to be falling apart, remember, God is in control. Nothing happens to you without God being aware of it and permitting it to happen. He is working out all things for an ultimate purpose. His promises are faithful and true.

Rom 8:28. And we know that in all things God works for the good of those who love him, who have been called according to his purpose. NIV

No matter what happens, God is with you. He will never leave you. He is working with you, in you and through you. We are co-workers (partners) with God as we build the church. We can be assured of victory because He is with us. He will not let us fail or fall. He will uphold and strengthen us.

God promises that you WILL get to Rome. You will reach the destiny He has for you. His word to you will come to pass. He will protect you. The storm won't stop you. You will make it through. God is in control. Your life is in His hands. You'll make it - you won't fail or fall. God is working all things together for your ultimate good that His purpose might be achieved.

4. God is pleased with faithful obedience.

Matt 25:21. "His master replied, 'Well done , good and faithful servant! You have been faithful with a few things; I will put you in charge of many things. Come and share your master's happiness!' NIV

Heb 6:10. God is not unjust; he will not forget your work and the love you have shown him as you have helped his people and continue to help them. NIV

Live with a sense of anticipation. You’ll do a better job yet. God’s purpose for you will be fulfilled. You'll reach your destination. It'll happen because God has planned it and ordained it. There is more yet to be done. You haven't arrived. God has greater things for you to do. There’s more, much more.

Jer. 29:11. For I know the plans I have for you," declares the LORD, "plans to prosper you and not to harm you, plans to give you hope and a future. NIV