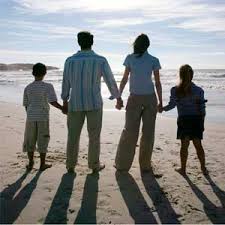 Just mention the word “family” in society today and you’ll get a variety of opinion and perspectives on what it is and what it should be. Changes to the family are reflected in the typical TV family. We've come a long way from Little House on the Prairie, The Waltons, The Cosby Show and The Brady Bunch (anyone remember The Munsters or The Adams' Family?) through shows like Friends (a bunch of friends living together in a pseudo-family), The Simpsons and now Modern Family.

The traditional “nuclear family” (a dad and mum and a few kids) is becoming less common (some sociologists would say “extinct”). Of course, in many Asian cultures, the “extended family” (including grandparents and other relatives) is still the norm. In the West, more and more people are living alone, single parent families are becoming more common, as are de facto marriages (including children - in 2009, 35% of births were outside of marriage) and blended or step families (as of 1997, 1 in 3 marriages in Australia is now a remarriage).

[For statistical purposes, the Australian Bureau of Statistics now defines families as: Two or more persons, one of whom is at least 15 years of age, who are related by blood, marriage (registered or de facto), adoption, step or fostering; and who are usually resident in the same household. That is, members of families who live in different households are not treated as part of the same family unit]

All of this has huge ramifications for society.

• More and more kids are growing up in fragile homes (the number of children who do not reach the age of 15 in an intact family with both of their biological parents has almost doubled within a generation).

• Family conflict and parental separation has adverse effects on children

• There is an increase in child abuse and neglect.

• More children are in out-of-home care.

• Issues for teenagers are on the rise, including binge drinking, self harming, risky sexual behaviour (at younger ages and with more people), mental disorders, and juvenile offences.

• More kids are growing up with out a dad around … an increasingly fatherless generation.

As followers of Christ, we are called to be in the world (doing life within the culture we find ourselves in, not isolated or removed from it) but not of the world (having a different ethic and value – that of love or self-giving sacrifice). We want all of our relationships to reflect the God we worship – a God who has revealed himself as love. That doesn’t just happen and it’s not easy. It requires the help of God’s Spirit and our commitment to be the kind of people who help to create healthy families and relationships, so that they are places of love, laugher and life … not of hatred, pain and damage.