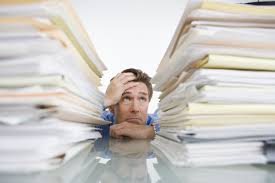 Ever feel overloaded? Overwhelmed? Ever wish there were a few extra hours in the day or maybe even an extra day in the week? If you are anything  like me, there are so many things to do and hardly enough time to do them in. This requires us to determine our priorities. Today and the coming week will most likely be busy but what will they be busy with? It takes discipline and focus to ensure that we keep first things first and not get swept up in the urgent or the trivial.

Here is a helpful article by Tony Schwartz that I read recently about dealing with overload. There are some great insights here for improving your personal productivity ...

What’s the first thing you do when you wake up in the morning, before you even brush your teeth? Is it checking the e-mail that’s flooded into your inbox overnight? Does the pull feel increasingly irresistible, even Pavlovian? Do you get so immersed in responding to other people’s agendas that 30 minutes can go by before you even look up?

Here’s a radical proposal: Don’t check your e-mail at all tomorrow morning. Turn it off entirely. Instead, devote a designated period of uninterrupted time to a task that really matters.

For more than a decade, the most significant ritual in my work life has been to take on the most important task of the day as my first activity, for 90 minutes, without interruption, followed by a renewal break. I do so because mornings are when I have the highest energy and the fewest distractions.

I’m doing it right now, but in all honesty, it’s gotten tougher in the last several years. My attention feels under siege, like yours probably does.

For the last 10 years, my colleagues and I have helped companies like Google, Coca-Cola and Facebook fuel sustainable high performance by better meeting the needs of their employees. Far and away the biggest work challenges most of us now face are cognitive overload and difficulty focusing on one thing at a time.

Whenever I singularly devote the first 90 minutes of my day to the most challenging or important task – they’re often one and the same — I get a ton accomplished.

Following a deliberate break – even just a few minutes — I feel refreshed and ready to face the rest of the day. When I don’t start that way, my day is never quite as good, and I sometimes head home at night wondering what I actually did while I was so busy working.

Performing at a sustainably high level in a world of relentlessly rising complexity requires that we manage not just our time but also our energy – not just how many hours we work, but when we work, on what and how we feel along the way.

Fail to take control of your days — deliberately, consciously and purposefully — and you’ll be swept along on a river of urgent but mostly unimportant demands.

It’s all too easy to rationalize that we’re powerless victims in the face of expectation from others, but doing that is itself a poor use of energy. Far better to focus on what we can influence, even if there are times when it’s at the margins.

Small moves, it turns out, can make a significant difference.

When it comes to doing the most important thing first each morning, for example, it’s best to make that choice, along with your other top priorities, the night before.

Plainly, there are going to be times that something gets in your way and it’s beyond your control. If you can reschedule for later, even 30 minutes, or 45, do that. If you can’t, so be it. Tomorrow is another day.

If you’re a night owl and you have more energy later in the day, consider scheduling your most important work then. But weigh the risk carefully, because as your day wears on, the number of pulls on your attention will almost surely have increased.

How you’re feeling at any given time profoundly influences how effectively you’re capable of working, but most of us pay too little attention to these inner signals.

Fatigue is the most basic drag on productivity, but negative emotions like frustration, irritability and anxiety are equally pernicious. A simple but powerful way to check in with yourself is to intermittently rate the quantity and quality of your energy — say at midmorning, and mid afternoon — on a scale from 1 to 10.

If you’re a 5 or below on either one, the best thing you can do is take a break.

Even just breathing deeply for as little as one minute – in to a count of three, out to a count of six – can quiet your mind, calm your emotions and clear your bloodstream of the stress hormone cortisol.

Learn to manage your energy more skillfully, and you’ll get more done, in less time, at a higher level of focus. You’ll feel better — and better about yourself — at the end of the day.

Tony Schwartz is one of the world’s top thought leaders on the workplace and getting the most out of people. He is the CEO of the Energy Project and author, most recently of Be Excellent at Anything: Four Keys to Transforming the Way We Work and Live.