Dealing with Overload
Rob Bell's Book: "What We Talk About When We Talk about God." 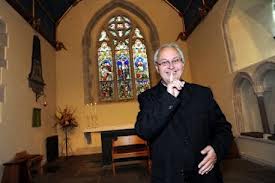 We live in an increasingly noisy and wordy world. Sometimes it can be hard to find a quiet place just to be still from all of the voices clamouring for our attention. In light of this, we shouldn't be surprised at the following news item ...

A church in England has recorded "the sound of silence" on to a CD which has become a surprise hit with its congregation. Members of St Peter's Church in Sussex, England recorded "a little bit of the silence" of the building's atmosphere. The recording features the ambient sound of footsteps, voices, background traffic noise—but mostly just silence.

Robin Yarnton, a church technician at St Peter's, said: "It does what it says on the tin. Silence is all you get. Mostly people have said it's nice and they like it, and that it's quiet and peaceful."

The full CD features a 30-minute track, with a spoken introduction, closing words, and 28 minutes of silence. An article in a Taiwanese newspaper called the CD a "half-hour of absolutely nothing." But it's more accurate to say that it's a recording of something valuable that we've lost in our frantic lives—silence. According to the church, customers from across the world have been snatching up the recording.