30 Ways to be Missional in your Workplace
ANZAC Day 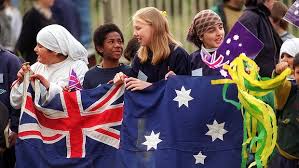 The 23 millionth Australian, due to arrive this week, could be a baby called Jack or even a young Pom.

The Australian Bureau of Statistics says the nation's population is set to hit 23 million people on April 23 at 9.57pm (AEST), but there's only a 40 per cent chance he or she will be home grown.

Migrants make up 60 per cent of Australia's population growth and the UK accounts for one in five arrivals.

Australia's population is increasing by 1048 people per day, or by 1.7 per cent a year, which equates to one new Canberra or three new Darwins per year.

The ABS now forecasts the population will exceed 40 million in the late 2050s.

Australia's median age has increased nearly five years from 32.7 to 37.5.

Tasmania's population increased by just 500 people last year, while WA is now growing by more than 1500 people per week.

More people are moving interstate to Queensland, while NSW had the highest departures to other states, with 1900 people leaving each week.

Posted at 05:00 AM in General Interest | Permalink