Stages of Life (Midlife)
You're Blessed! 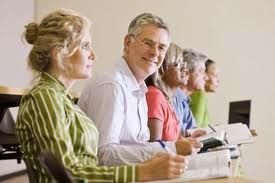 In medieval times the Catholic worldview of the human life span was often depicted as a circle. In the centre was the image of Christ. Around this divine hub, were illustrations of the different ages of life from infancy to the grave. Each age, like a spoke, was equidistant from the hub. This suggested that every point in human life existed in the same sacred relationship to the divine.

During the Protestant Reformation in the 16th century, this symbolism underwent a profound and lasting change. Instead of a circle, the image of an ascending and descending staircase became prevalent. The image seemed better suited to the new importance of work, ambition and changing social roles in the emerging market economy of Protestant Europe. This is where we developed our notion of the stages of life, like steps going upward and then downward. At the highest step was a man or woman at the age of fifty – the peak of life.

The staircase model of human development, which views the fifties as the beginning of decline, has undergone a major transformation of late. Nowadays experts are more likely to conceptualise the life span tableau as five ascending stairs (a decade for each), with a wide platform at the top for those in their fifties and sixties (and even for many in their seventies and eighties), before a rather quick drop into illness and death. At age fifty, most of us can look forward to another thirty years of life. Advances in medicine and education mean that people in their 50s, 60s, and 70s are healthier, better educated, and have the prospect of far more able years ahead of them than was the case for their parents or grandparents.

For many people, mature adulthood represents the time of greatest satisfaction. You’ve passed beyond the insecurities of early adulthood (“Will anyone love me?” “Will I find a place for myself in the world of work?”). You’ve reconciled with many of the anxieties of midlife (“I’m growing older!” “Will I achieve my dreams?”). But you haven’t reached old age when chronic illness and concerns about approaching death can take centre stage. You’ve raised a family perhaps, and seen your young ones leave the nest and live independent lives, freeing you up to enjoy your own life more fully. After years of work, you’ve hopefully accumulated at least some degree of financial security. You’ve perhaps begun to take on satisfying new roles as a grandparent, mentor, and/or community leader.

Contrary to all those “over the hill” greeting cards – life in the 50s, 60s and beyond can in many cases be better than what went before. Of course, we need to adjust to an aging body. “At 40, you know you’re not as young as you used to be. At 50, you realise it almost every day.” Adopting a healthy lifestyle helps immensely.

A vital key to successful aging appears to involve the capacity to give back to the community in some meaningful way. Its time to nurture and care for future generations on a more collective basis. Generativity is about receiving something from the past, putting your unique contribution into it, and passing it on to the future. It's what you do when you stand between the generations.  This greatly affects psychological well-being at this stage of life.

Many people at this age feel squeezed between two generations. One woman said, “It is as if there are two mirrors before me, each held at a partial angle. I see part of myself in my mother who is growing old, and part of her in me. In the other mirror, I see part of myself in my daughter. I have had some dramatic insights, just looking into those mirrors … It is a set of revelations that I suppose can only come when you are in the middle of three generations.” Role reversal can occur too, where the children become the parents and the parents become the children. For instance, a woman may just finish raising their children then have to care for ailing parents. This can be draining for some.

At some stage, parents die. That’s hard for all of us. Alexander Levy says, “Parents provide a unique spot on this planet, which is called “home”, where we can return, if we need to, to be loved and feel like we belong … after parents dies, its gone.” This is an unfathomable loss, regardless of the location or quality of that place called ‘home.’ No wonder, C.S. Lewis said, “The death of a loved one is like an amputation.” Like amputees, we often reach to scratch what is missing … only to discover there is nothing there.

1. Become a teacher, mentor, referee, or coach. Volunteer. Share your expertise with the world. Avoid the dangers of stagnation and inward-focused selfishness. Cultivate generosity.

2. Find a cause you are passionate about. Don’t retire and die. “There is no age limit to enthusiasm, and retirement is a period in which individuals can discover or rediscover their passionate interests.”

3. Nurture life long friendships and give the gift of love.

4. Have a healthy and active mind. Keep learning.

Posted at 05:00 AM in Family, Personal Development, Relationships | Permalink