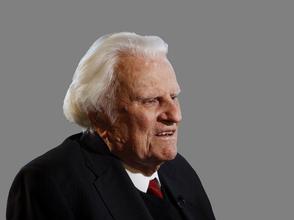 “I never expected I would live this long, outliving my beloved wife, Ruth, as well as many friends and loved ones,” Graham said last week. “I believe God must still have a purpose for keeping me here, and I look forward to seeing what that might be.”

His daughter, Anne Graham Lotz, credits her father's long life to prayer, and said she hopes people continue to pray for her father. Graham's son, the Rev.Franklin Graham, says his father has been saying since he turned 90 that he expects to live to 95.

“Daddy at 94 years of age is still a role model to us kids,” Franklin Graham said. “And I’m just thankful and grateful to God that he is still with us. And his mind is—he is sharp as a tack.”

Billy Graham's daughters say he asked for a birthday menu of hot dogs and apple pie. The evangelist will have a quiet celebration at his home in Montreat, N.C., with about 20 family members—his children, grandchildren and great-children. “I love them all and can't wait to see them again,” he said.

At 94 years old, Graham is far from inactive. Preparations are underway for “My Hope,” to be launched by the Billy Graham Evangelistic Association in conjunction with Graham's 95th birthday in 2013. He fully supports the project and hopes to be able to participate in some way as the date draws closer.

The world-famous evangelist is also still writing books. In his most recent, Nearing Home, Graham shares how he has come to view old age and discusses various life transitions. His 31st book, expected to release next year, is about his past seven decades in public ministry.

Graham also earlier this year finished a hardcover edition of an anthology called Chicken Soup for the Soul: Billy Graham & Me, which documents his life and legacy. It will be released in February.

Posted at 01:03 PM in Biographies | Permalink