The Tragedy of Halloween 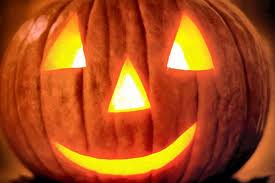 The bizarre preoccupation with Halloween shows no sign of abating. Indeed, the enthusiasm with which some shops are marketing this celebration of evil, death and the occult suggests that their owners are banking on huge sales of pumpkins, masks and witches’ hats..

Many concerns have been raised concerning Halloween over the years and the two most common are that Halloween encourages dabbling with the occult and that it celebrates evil. Both are true but let me add another: Halloween raises big questions but only gives lies as answers. This is serious because the questions are about important issues and most of the people involved in Halloween are children. What our children are taught today will affect how our adults behave tomorrow and there are four big lies that Halloween perpetuates.

The first lie is that evil is external. Halloween promotes a host of ‘evil creatures’ who will be banging on doors – characters clothed with artificial scars, fake teeth, claws and synthetic gore. What all this says is that evil is threatening but that it is something that is outside what we are. The reality is that while there is an external evil and children do need to be told that genuinely nasty characters do exist out there in the big wide world, the really dangerous evil comes not from outside but from within. Jesus himself said, ‘For out of the heart come evil thoughts – murder, adultery, sexual immorality, theft, false testimony, slander’ (Matthew 15:19). It’s not just them out there we need to worry about, it’s us.

The second lie is that evil is ugly. The best Halloween costumes are normally considered to be the scariest and ugliest. The message is that you can recognise evil because evil people look ugly. There are two problems with this. One is that it is terribly offensive to those people who suffer genuine disfigurements. Ugliness does not equal nastiness. The bigger problem is that the most dangerous form of evil is precisely that which appears wrapped up in a nice package. In fact, the Bible tells us that ‘Satan himself masquerades as an angel of light’ (2 Corinthians 11:14). Fraudsters, corrupt bankers and seducers of all kinds specialise in looking nice. Evil is far more subtle, far more sinister and far more seductive than any ghoulish figure dressed in a cloak.

The third lie is that evil is trivial. Many children are told at Halloween that even the scariest figure at the door is only an ordinary person dressed up to look horrible. We say that there is, in reality, ‘nothing to worry about’. Well, I’m afraid that isn’t true. The Bible, common sense and history all teach us that evil is a serious matter. Whoever does evil does real damage, not just to their victims but also to their own souls. To do evil is to walk along a path that leads away from God and towards destruction. And for all the fake skeletons on view at this time of year, death is no joke!

The fourth lie is that evil is undefeatable. Nowhere in Halloween is there any sense that evil should be combated and can be defeated. The dead remain dead and the occult powers live to scare another day. Those who knock on our doors in their creepy costumes do so confident that their demands will be met and they will be given something. The subtle lesson that Halloween teaches here is that all you can do with evil, death and the occult powers is to appease them by making an offering to them and hoping that they will go away. How different is the Bible’s perspective that we are to resist the devil (James 4:7). How much more encouraging is the good news that, on the cross, Jesus defeated all the powers of evil. ‘And having disarmed the powers and authorities, he made a public spectacle of them, triumphing over them by the cross’ (Colossians 2:15).

The common criticism of Halloween is that it raises dark and troubling matters. That, actually, is not the real problem. Questions such as ‘What does happen after death?’ ‘Where does evil come from?’ and ‘Who – or what – ultimately runs the universe?’ need to be asked. The tragedy is that having raised these questions, the only answers Halloween gives are lies. Our children deserve better and more honest answers. So let’s raise these questions and answer them.

In the mean time let us pray as Christ Jesus taught us: ‘Lead us not into temptation, but deliver us from evil’.