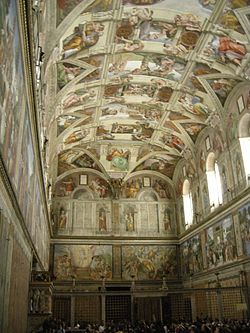 Michelangelo was one of the greatest artists of all time. He preferred to work in sculpture but became reknown for his paintings. It took a lot to persuade him to paint the ceiling of Sistine Chapel but it eventually became his most famous masterpiece. The walls were already painted with a multitude of stories of Moses and Jesus. Michelangelo took responsibility for painting over 1,000 square metres of the ceiling area between 1508-1512. He covered it with 300 majestic biblical scenes ranging from creation to the last judgment scene.

What most people don't know is that at least 12 other painters helped him with this feat … all of whose names are unknown to us today. In fact, even art experts are unsure which sections were painted by Michelangelo and which were painted by others.

This is a great example of the principle of teamwork. No person does anything great or significant alone. Others are always involved - encouraging, supporting and contributing.

Posted at 09:14 PM in Biographies | Permalink