Jeremiah: Prototype for Prophets, Preachers and Pastors
Some Thoughts on Singleness

Update on the State of the Family 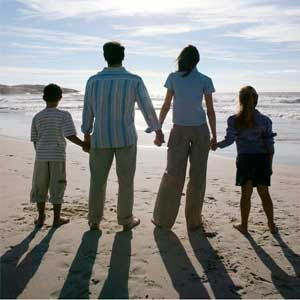 God reveals himself as a relational God existing in a community of persons: Father, Son and Holy Spirit. Three, yet one. Human beings are created in the image or likeness of God (Gen.1:26-28). We too are relational beings. When God created the world, he was pleased with every days’ work, declaring it “good” (Gen.1:4, 10, 12, 18, 21, 25).” After creating everything, including humans, he said his work was “very good” (Gen.1:31). But then there is a turn in the mood. Suddenly God says something is “not good” (Gen.2:18) – and this is before sin had entered the world.

God saw it as “not good” that Adam was alone. It wasn’t that Adam was lonely – he had God and all the animals. But Adam was alone in that he was a solitary individual human being and as such could not reflect the image of God, which is relational. So God created Eve … not to do the dishes and the housework … but as a “partner” for Adam (Gen.2:18). Only man and woman together could accurately reflect the image of God. This was not so much about marriage as it was about community. We were created for community – for relationship.

Just mention the word “family” in society today and you’ll get a variety of opinion and perspectives on what it is and what it should be. Changes to the family are reflected in the typical TV family. We've come a long way from the Little House on the Prairie, The Waltons, The Cosby Show and the Brady Bunch (anyone remember The Munsters?) through shows like Friends (a bunch of friends living together in a pseudo-family), The Simpsons and now Modern Family.

The traditional “nuclear family” (a dad and mum and a few kids) is becoming less common (some sociologists would say “extinct”). Of course, in many Asian cultures, the “extended family” (including grandparents and other relatives) is still the norm. In the West, more and more people are living alone, single parent families are becoming more common, as are de facto marriages (including children - in 2009, 35% of births were outside of marriage) and blended or step families (as of 1997, 1 in 3 marriages in Australia is now a remarriage). Currently, here in Australia 43% of first marriages end in divorce; 50% of second marriages end in divorce; and 70% of subsequent marriages break up.

All of this has huge ramifications for society.

As followers of Christ, we are called to be in the world (doing life within the culture we find ourselves in, not isolated or removed from it) but not of the world (having a different ethic and value – that of love or self-giving sacrifice). We want all of our relationships to reflect the God we worship – a God who has revealed himself as love. That doesn’t just happen and it’s not easy. It requires the help of God’s Spirit and our commitment to be the kind of people who help to create healthy families and relationships, so that they are places of love, laugher and life … not of hatred, pain and damage.