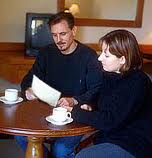 [Below is a news release from Lark News. It's exactly that, a lark - "to engage in spirited fun or merry pranks." Enjoy it. It may also be thought-provoking]

WINSTON-SALEM — Julie and Bob Clark were stunned to receive a letter from their church in July asking them to “participate in the life of the church” — or worship elsewhere. “They basically called us freeloaders,” says Julie. “We were freeloaders,” says Bob.

In a trend that may signal rough times for wallflower Christians, bellwether mega-church Faith Community of Winston-Salem has asked “non-participating members” to stop attending.

“No more Mr. Nice Church,” says the executive pastor, newly hired from Cingular Wireless. “Bigger is not always better. Providing free services indefinitely to complacent Christians is not our mission.”

“Freeloading” Christians were straining the church’s nursery and facility resources and harming the church’s ability to reach the lost, says the pastor. “When your bottom line is saving souls, you get impatient with people who interfere with that goal,” he says.

Faith Community sent polite but firm letters to families who attend church services and “freebie events” but never volunteer, never tithe and do not belong to a small group or other ministry. The church estimates that of its 8,000 regular attendees, only half have volunteered in the past 3 years, and a third have never given to the church.

“Before now, we made people feel comfortable and welcome, and tried to coax them to give a little something in return,” says a staff member. “That’s changed. We’re done being the community nanny.”

Surprisingly, the move to dis-invite people has drawn positive response from men in the community who like the idea of an in-your-face church. “I thought, ‘A church that doesn’t allow wussies — that rocks,’” says Bob Clark, who admires the church more since they told him to get lost. He and Julie are now tithing and volunteering. “We’ve taken our place in church life,” he says.

G'Day Mark,
Very Very Clever!! I know through my own experiences including, what feels like going through the wall several times, that God wants each of his children to take their place in the body. It is never an option and at times can be even painful as we seek to discover our giftings/skills and where our place or places for service exist. My own experience is that if you seek God will reveal your giftings through your daily walk and feedback from other brothers and sisters. It is fun and you always get more out of serving that what you put in. I have also come to realise that being an active member of a life group is not optional. Myself and Fiona went through a time(several months) where we were not part of a life group and we missed out. We are now part of a very lively bunch lead by a Kevin and Jenny Russell who are a great inspiration to us all. We have attended about 4 different life groups during our journey at City life and each has been unique and a great blessing. Sometimes I think you may need to try different groups at different times to find a group that suits you and your walk. So I would encourage people not to give up and keep going knowing that God has a very special group of his people for you!!
I get the drift, Mark, that the numbers quoted in the article are maybe not too far away from the truth at our Church?? The fact that you have posted the article says something about the frustration you are feeling and how to move forward from here. Wish I had some great instant answers. Just thought odf something here goes. What about a "career type counselling service" for discovering your gifts and where they match up in the Church. A time maybe where a individual can talk with a "professional" in this area and walk away with some direction and action plans. Alpha is certainly an area of service that is experiencing real growth in demand and more volunteers are needed in all areas of the ministry. There is really quite a broad range of gifts required across the Alpha ministry and more hands needed. Anyway I think this time I have really exceeded my 100 words(only just read that rule. sorry about that).
Cheers and God Bless
Mark Battersby

I think one major difference to Aussie churches is that they track tithes, so they have fuller metrics to work with and can do something like this confident it won't hit the bottom line. Perhaps that shouldn't play into it, but I'm sure it does.

Whoops, just saw its not serious. Still wanted to do it a few times though! I think the Christian consumer culture needs a shake up.

There are strengths and weakness to any model of church that God has led you to or is leading you towards. The Mega Churches strengths are many. Too many to mention and unfortunately some weaknesses. It takes a lot of volunteers to make the mega church model work. Using people to make it work can be a great drain on people and actually draw them away from their true calling to share the gospel with their circle of influence. Larger churches have to guard against becoming a huge organization with program after program that can deter from the simple gospel message and a more simple expression of the body of Christ. I remember being so involved in giving my all to make my church better that I was neglecting what God had truly called me to, which is to be a light(friend) and love(serve) my community/neighborhood/city. When we "downsized" or mission became more defined and a personal conviction that came straight from the Head(Jesus Christ". Smaller expressions of the Body of Christ have their problems too and I believe the diversity and creativity of all of Christ Church is what is needed to reach or diverse world.

Since Wesley Mission days as Team Leader and Coordinator of up to 2,500 volunteers/laity across over 100 Ministries, Caring Centres and Community Services, I have seen how many other church communities can do the Great Commission and Great Commandment far, far better.

If say 10% of any church community do 90% of the ministry, and 10% give 90% of the total budget of any church, any size, anywhere in Australia; perhaps the Lukewarmness of the rest needs to be challenged, educated and a methodical system be put in place that sees Gods transforming power and glory increased many fold!

A challenge, in a church world of attenders and consumers maybe it is time to up the ante and ask discipleship questions of those that call them selves church but are more of the crowd.

It takes a lot of disciplined methodical hard work to initially implement what happened at Wesley Mission, Sydney, during what Rev Dr Gordon Moyes described to me, in a penned note, as:"you will be recruiting and deploying more volunteers than at any time in the entire history of the Mission."

However, once up and running, maintaining and growing volunteer/lay involvement,while having its occasional moments;is well worth the time investment. Transforming your church family from a committed core of volunteers and tithers, and large bunch of nice freeloaders; to Great Commission and Great Commandment Champions!

You just need to change some things, one being the Culture, another being Relationships...

Yes, the challenge for the church is to turn consumers into contributors, members into ministers, and converts into disciples. Jesus loved crowds but he never said, "I will build my crowd." He always challenged people to higher levels of commitment to his kingdom cause. We must do the same.

I agree Mark. Well said, We have a choice to be sensitive to seekers creating a comfortable spiritual environment and grow a crowd and try to get deeper things into them at times. Or as I percieve, do as Jesus and the apostles did. They presented one side which is well covered these days (the love of God, grace) and many similar critical themes which in past times were not covered well at all. But maybe the pendulum has swung and we have omitted, diluted, ignored other critical themes which Jesus added (the fear of God, dying to self the cross, even hell etc which Jesus believed in but, many now do not because the do not respect the bible enough to retain it (liberal theology), or they are afraid of the people or don't want to be pecieved as a loveless or heartless preacher. But I feel Jesus made being comfortable or complacent impossible for the indifferent soul but it was cleansing and life changing for the willing soul (a seeker starts as one or the other). This started slow but changed the world as the (whole) truth (word)spoken in love and the (spirit) worked together. Loved your latest post Mark on this theme (spirit and word.

I like the trend. Sort of would sort the wheat from the chaff now wouldn't it. Christian consumerism just has to go. Everyone should be connected, growing and either being prepared for or undertaking service. How good would that be?

I am so thankful that I was allowed to 'freeload' until I was saved! Everyone thought I was a Christian as I had attended church faithfully since I was a little girl growing up in Wales... never assume anything! I looked like a Christian, even talked like a Christian... I just came along for the music, which was not brilliant, I just loved to sing. One day, Jesus showed up in my kitchen, when I was 30 years old, and I have never looked back, so I'm thankful that I could remain anonymous until then. I now assume the people I meet at church (CityLife) are unsaved until proven otherwise! :0)

Of course your going to get one of two comments; either positive or negative right, so leaving any seems moot. I will say that if the church was on mission in the first place, with vision in mind as to what the church looks like in the N.T. as Jesus intended in His word, then they would not have to be making a rash and harsh approach to new standards with its sheep. The perspective of serving and giving as its premise can be debated verses upholding to the teaching of the word and the guiding, equipping, protecting, etc...of the Lord's sheep. This begs the question of the responsibility to those the church has as its sheep initially, meaning; is it for the church (physical) or the Body (spiritual) welfare, i.e., for them or for yourself? Sending them to another church simply says we still don't care, were going to sweep you under the rug, by sending you to another church, because nothing changes in those lives your asking to go. I like the perspective of the whole body serving as a community of believers, but we may toe the line of legalism when it comes to who's serving and how much were giving to both of the positions your trying to uphold; serving and tithing.