Ever Felt Dry Spiritually?
Jesus in all the Books of the Bible 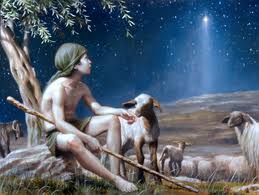 Silent Night is one of the most popular carols sun across the world at this Christmas season. There are many romantic stories about how it was composed. Here is one of them that may contain an element of truth to it ...

On Christmas Eve 1818 in Austria, the Vicar of a small church in Oberndorf had written a new song to be sung on Christmas Day. The organist, Franz Gruber had set the words to music but the organ broke and it looked like it was all going to be a disaster. In an attempt to rectify the situation, Frank grabbed a guitar and accompanied the Vicar on the first ever rendition of Silent Night.

When the organ repair man turned up to fix the organ, Gruber played him the new song to test that the organ had been fixed. The repairman loved it so much that he took it back to his own village. There, the four daughters of a local glovemaker began singing it in concerts all over Austria and, as the saying goes, the rest is history. Silent Night is one of the great carols of the world and it got its first big break because an organ broke.

There's a good message in that story. Sometimes when things go wrong, something good comes out of it. God has a way of working like that.