Ready for Adventure? An Invitation from Earnest Shackleton
You Lost Me - Latest Church Research from Barna Group 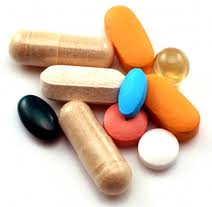 Ok, so how many vitamins and/or supplements do you take each day? Personally, I take a few tablets with my breakfast each morning - fish oil, vitamin D, and a men's multi-vitamin. The fish oil (Omega 3) helps to keep my cholesterol down a bit and the Vitamin D gives me a little extra energy, especially since I work mainly indoors and don't get a lot of sunshine. A few years back I took some supplements but found them so expensive to buy and I didn't really notice that much difference in my energy levels.

So do they make a difference? Are they worth the cost?

An interesting article recently appeared in the October 10th edition of TIME magazine, telling the story of John Cloud who took 3,000 supplements over five months (22 pills a day), then took a battery of tests to see what really happened. A total of 31 measurements were taken - before and after. Remarkably, only two of the values on his blood report had changed significantly. There was a 75% vitamin D increase (due to a vitamin D3 supplement he had been taking) and an increase in the level of his good cholestoral - HDL (due to the 2,000 mg fish oil concentrate tablet he had taken). Absolutely, nothing else had changed!

Amazingly, John felt different - healthier and more robust. But his blood hadn't changed, meaning that a strong placebo response had occurred. This resulted in a licensing effect (which nutritionists call 'compensation') which caused him to change his routine. Because he was feeling a little better and woke up with more energy, his eating habits took a bit of a dive, as did his exercise routine.

The conclusion of the study was that a normal diet with adequate exercise is all that the average person needs to be healthy. Good health is not a series of tablets to take but rather is a series of responsibilities to meet - water instead of soda, a piece of fruit instead of chips, and real fish instead of a giant fish-oil capsule.You can take vitamins on the faith that they will make you better - and if you have a real vitamin deficiency, they will. But there's more science behind another way of getting your vitamins - eating right.

Thanks Mark. Very useful information and statistics! I'll have to start taking fish oil to lower the cholesterol :) I prefer healthy eating & living to vitamins or drugs myself, but do like an occassional vitamin C.

An old forgotten saying- there's a sucker born every minute! Most of those unnecessary vitamins go down the loo courtesy of our body's tried and true excretion systems! That's a lot of money to put down the loo!