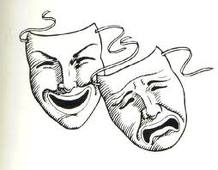 In a sense, both are right. Comedy and tragedy both speak of things being out of order; in one case, simply by being incongruous and therefore funny; in the other case, by things not going the way they should, and people being crushed as a result.

When the early Christians told the story of Jesus they never actually said that he laughed, and only once that he burst into tears. But all the same, the stories they told of him constantly hinted at laughter and tears in fair measure. It isn't so much that Jesus laughed at the world or wept at the world. He was celebrating with the new world that was beginning to be born, the world in which all that was good an lovely would triumph over evil and misery. He was sorrowing with the world the way it was, the world of violence and injustice and tragedy which he and the people he met knew so well.

Jesus took the tears of the world and made them his own, carrying them all the way to his cruel and unjust death to carry out God's rescue operation; and took the joy of the world and brought it new birth, as he rose from the dead and thereby launched God's new creation.

The Christian faith claims that in Jesus God himself shares this passion for justice and put it into effect, so that in the end all tears may be dried and the world may be filled with justice and joy.

Frederich Buechner's little book 'Telling the Truth: The Gospel as Tragedy, Comedy and Fairy Tale' is probably one of the most brilliant books I've ever read.