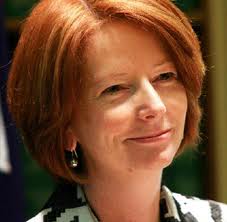 Some old but good news ... in August last year, new Australian Prime Minister Julia Gillard promised to extend the use of state funds to put staff chaplains in both public and private schools (as it has since 2007) through to 2014. State-funded chaplains now serve 2,700 schools and Gillard wants to add another 1,000.

Gillard, a self-professed atheist, pledged faith in the chaplaincy system shortly after taking office. "We think it has been a great success, and wanted to make sure schools around the country were fairly benefiting from it," Gillard told Australian Christian Lobby director Jim Wallace.

The program is voluntary. Chaplains offer comfort and support to students and staff as well as general religious and personal advice. Many school principals are keen for this pastoral support, understanding that students are often more comfortable approaching their chaplain than other adults in the school community.

Assuming the chaplains are Christian. We had someone from the Bahai faith wanting the job in our school. Thankfully the job went to the Christian.