Some Advice for Lebron James 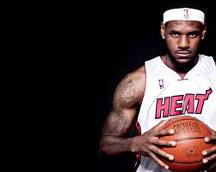 Lebron James is possibly the greatest basketball player on the planet today. I like him. He is a gifted athlete and has a rare set of skills that are a joy and inspiration to watch ... when he is playing well.

However, the way Lebron went about announcing his decision was wrong. "The Decision", as it is now referred to, was made publicly on national television and the owner of the Cavaliers, along with the coach, Lebron's teammates and all of the fans ... found out at the same time. This was disrespectful, to say the least, and has been a catalyst for Lebron's popularity plummeting dramatically - almost as bad as Tiger Wood's fall from grace. Former Cleveland fans burned uniforms with his number on them and he is now booed in every stadium across the USA, except for Miami. To top it all off, this week he is about to enter his old Cleveland stadium to face 20,000 extremely hostile fans when Miami take on Cleveland for the first time this season.

So what should Lebron do? Simple. He should apologise. Let's call it "The Apology." Here's a sample script for Lebron: "In reflecting on my decision to move to Miami this last summer, I now realise that the way I announced my decision was wrong. It was disrespectful to the Cleveland Cavaliers and I am sorry. It could have been done better and I could have minimised the hurt and pain I have caused. If I did it over again, I would do it differently. Please forgive me."

Now, I am sure there would be plenty of cynics who would not change their opinion of Lebron one bit even if there was "The Apology" ... BUT at least he would be taking full responsibility for his actions. He totally misread the implications of "The Decision" and the public sentiment that followed. Apologising is the right thing to do ... and it might just start to turn the tide of opinion that has been so strongly against him. Finally, it might play a small part in helping the Heat develop some better chemistry, after such a poor start to the season, and become the championship contender everyone thought they would be.

I agree with you Mark. An apology is called for to smooth things over.
Hope James reads your blog :)

The reason for the way the decision was handled was purely to maximise TV & cable ratings. Maximise the sponsorship $ & return of investment. Cav fans would boo him anyway. What should be more of interest is that James, Bosh & Wade dropped their income by $15 million & $17 million each to ensure they kept Haslem @ Miami. Go Heat!!

Wish Bomber Thompson would also take the time to say sorry to the Geelong Footy Club. His lying got him into a tangled web even if he is yet to admit it.
Go cats, Tim

I think it's a case of an innocent man being crucified. I disagree with the popular stance that his announcement was so disrespectful. The media frenzy was intense, and the pull of him in so many different directions so strong, I don't know how he was able to even think straight. What people are holding against him is perceived "cowardice" for "taking the easy road" instead of being "like mike" and overcoming the Cavaliers’ woes, not the 1 hour special. When I saw him buckle under the weight of expectation in his final few games of the playoffs last year, I saw a privately suffering Lebron, and I think having comparably skilled team mates in Wade and Bosh was the refuge he felt he was needing, to help him carry the burden of expectation.

As an afterthought, I think he was right not to tell anyone before his announcement otherwise whoever he told, beside Miami, would have tried to change his mind before his public announcement - so it was pragmatic not arrogant I think.

well writen Mark... are you a Cavs fan?

I think there may be too many superstars in that team though... like Real Madrid in soccer... most expensive team in the world, but still unable to win a Champions League Trophy!

Totally disagree with you Daniel See.

Just watched the jazz toy with the cavs and the lakers crush the cavs before that. I'm beginning to think lebron did do something regrettable. Cleavland as a city has been gutted. As one of the most unlucky cities in American sports history I feel really sorry for them. It illustrates how reaching for what you want can sometimes cause pain for a lot of people who could have used a little hope.