Inside the Christmas Story
Growing Strong in the Seasons of Life (Pt.1)

Reflections on the Year 2010 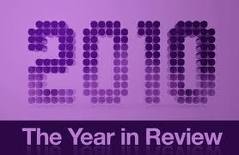 Today is the last day of 2010 and soon another year will be history and another year (and decade, depending on how you count) will have begun. Each year we all become a little older and life moves forward. I turned 49 this year, so next year is the big 50. Our oldest son got married this year and our youngest finished Year 12. My, how time flies!

Various journalists and newspapers have taken time to reflect on 2010, noting some of the big news stories, including the Chilean incredible mine rescue, the tragic coal mine accident in New Zealand, the destructive earthquake that hit Haiti killing 230,000 people, the floods that devastated Pakistan affecting 20 million people, and the draws and close calls (including hung parliaments in the UK and Australian, and a drawn Grand Final in the AFL). TIME magazine named the founder of Facebook as the person of the year. Yahoo has a Year in Review web site. Christianity Today magazine has written about it's Top 10 Stories of 2010.

In the midst of all of this, God has been at work building His kingdom all over our world. Sometimes we see it, sometimes we don't. Sometimes it is spectacular, sometimes it is not. More often than not it is hidden in the ordinary day-to-day aspects of our lives. We experience His touch but don't always recognise it at the time. Often on reflection, we see God in new and fresh ways.

What about your life? What were some of the highlights of 2010 for year? With the passing of the times and seasons, it is always good to stop and reflect ... on what God has done, on what life has brought us (our experiences), and on what we have learned. Live ... and learn ... and be sure to give thanks.

I'd like thank everyone for their support and involvement with this BLOG during 2010. I also pray that during this coming year, as we continue to journey together with God, that He will lead us forward into a fuller expression of His will in our lives and on this earth - for His glory.

Thank you Mark for your wise insightful and inspiring encouragements and for being a wonderful blessing to many. Look forward to what God will do in 2011:) Happy New Year!

I think 'Person of the Year' should have gone to Julian Assange - the 'Robin Hood of the information age'.