What about Family First? 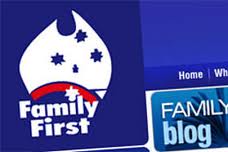 The Family First political party was founded in South Australia in 2002 and spread nationally in 2004. The Family First party has not sought to promote itself as a Christian or church-based party but rather as a party with a primary focus on looking out for families.

Family First currently has four members in parliament, two in SA, one in NSW and one in Federal Parliament - Steve Fielding, who was elected in 2004.

Steve and his family attend CityLife Church. However, I do not act as Steve's policy adviser. We have casual conversations from time to time about various issues but as a politician he is there to represent the views of his party and he is accountable to the Family First Board of Directors.

To find out more about Family First and their policies, visit their web site. You can also ask questions or give feedback directly to Steve or any other Family First members using the contact details on their web. Like every political party, they are always looking for volunteers around election time.

I'm glad that Family First now is "a party with a primary focus on looking out for families."

I can remember when they came out of the blocks in 2004 with a few high profiled Christian candidates , Alan Myers, Danny Nahlia. The words used at that time in Christian circles I associated with were definitely 'Christian party'.

I think it will take a while for them to distance themselves from this period with the residue still sticking.

For the party to grow and to have a wider appeal in the community 'family focused and values' is much more appealing selling point than just a 'Christian' focus.

@Scott - the Bible says to be wary of half truths - like calling Family First "a party with a primary focus on looking out for families".

It is still a party focussed on "right wing Christian" values - not "Australian Family" values.

In Australia, based on 2006 ABS statistics, there are 5,219,165 families - meaning the majority of Australians live in some kind of family community.

So polling of what families want should [generally] reflect what Australians want - you should never see a case where the vast majority of Australians disagree with what "families" want.

If you do see this, you see a party with another agenda.

On abortion - polling shows that the vast majority of Australians (families included) support abortion rights. Family First opposes abortion of all forms. (Polling in support of Family First's policy is as little as 7%!)

On mandatory internet filtering - despite all polling showing the majority of Australians do not support support a filter, plus experts proving that it will not [as Family First claims] improve "child protection" (due to the fact that it will be impossible to effectively and accurately manage censorship of over 10 BILLION webpages and 234 million websites, and the filter will not affect Usenet, BitTorrents, IRC etc)....
...Still, Family First still supports an infeasible, unpopular, unmanageable, expensive (tens-of-millions of dollars) policy.

There are other examples (e.g. Climate Change), but you see my point: Family First is still, fundamentally, a political party representing the Christian "Right" - not putting families first.

It would be nice to have a party supporting family values (one with wider appeal) - but we're still looking at a Christian party in sheep's clothing.

You make a good point Brent. I also agree with you at looking at a 'Christian party in sheep's clothing.' 2004 is still in my memory. Some Churches having how to vote Family First during the announcements.
Though not all Christian party's policies are bad! While many of the policies are moralistic and probably out of s tep with most Australian's including families (Many of which I agree). The areas of social justice are to be applauded. I breathed a sigh of relief when Fielding stood up to Howard on the refugee issues.
That been said the ballot box will be the great decider in the relevance of Family First for Australians.

Both homsexuality and abortion are condemned by GOD through his word (the bible).

God of course we know does not lie.

So on these 2 issues Family First are correct.

Hi Brent, forgive me if I'm not overly convinced by your argument on behalf of what "polling shows". Show me the references please.

Also Brent can you please unpack your so far concealed concept of what constitutes a family? For instance where do you stand on a child's right to a mother and a father? Or am I being a "right winger" for asking?

I too was glad when Family First opposed the Coalition's stance on refugees. Sadly, they didn't have the power to do anything about it at the time (with the Coalition holding both the Senate and HoR).

And I was glad when they stood against the proposed Work Choices laws, and looked to have them amended.

Whether right or wrong, it looks like Family First's influence is coming to an end soon though. Without Labor's preference flows, it looks like they'll lose Fielding's seat, I'd be surprised to see Day get a seat in SA, and the rest of the states look poor for them.

@Anthony McGregor - I assume you mean on Abortion?

You're right - the figure wasn't 7%. It was 17% of Australian's support Family First's policy to tighten abortion laws, and restrict access to abortion.

Saulwick (1987) showed only 7% of Australians would not approve of Abortion in any form. Granted, this is relatively old - but it confirms and adds insight into the other polling, below - and later polling showed that even greater numbers of Australians supported legalised abortion in later years.

On the other side of the same question - in 2006, a Roy Morgan poll found 65% of those polled approved of surgical abortion in general, with no mention to timeframes and trimesters.

That same 2009 study found 77% of winning candidates from the 2007 federal election were in favor of unrestricted abortion. (Although this shows political opinion, rather than public opinion.)

And a 2010 study by The Medical Journal of Australia found 61 per cent of Australians over the age of 18 thought abortion should be "lawful without question" for a woman in her first trimester of pregnancy. (i.e. access should not be restricted in any form.) A further 26% said it should be lawful in certain circumstances. This left only 13% opposed abortion in all circumstances, with 87% of Australians supporting abortion in some form or another.

Let me know if you want more. There's roughly one abortion poll conducted every 18 months - these are just the ones I could fish out easily.

Whatever the case, it's clear that in opposing abortion Family First is in opposition to the views of the majority of Australians.

Peter Harris, as the head of Family First, was quoted as saying "Family First believes that all co-dependents should not be discriminated against - whether Homosexual or not."

Is Family First still correct in its stance on Gay rights?

I like your cut and paste "research" from Wikipedia, Brent. Most of the references on that page are taken from The Age and Pro Abort sites. Talk about left leanings.

What is a Family?
“Family” for Family First means the relationships that bind grandparents,
parents and their children, mums and dads and siblings and form the basis of
a living community. A broader experience of extended family relationships
enriches family life. Family grows out of heterosexual relationships between
men and women. Family life flourishes when couples strive for stable
commitment to sexual fidelity to each other. Family is about striving for a
shared life journey together founded on a lived experience of relationship.
There can be no doubt that flourishing family life creates the best environment
for children.

But enough of the snippets. Thank you Brent for inspiring me to go to the Family First website and see for myself the goodness that this party represents. They have definitely got my vote!!

I missed your last comment (it came through after I'd loaded the page).

You suggest that my concept of a family is somehow concealed.

I only mentioned "family" in the context of ABS statistics.

Here's how the ABS defines families:

"Two or more persons, one of whom is at least 15 years of age, who are related by blood, marriage (registered or de facto), adoption, step or fostering, and who are usually resident in the same household. The basis of a family is formed by identifying the presence of a couple relationship, lone parent-child relationship or other blood relationship. Some households will, therefore, contain more than one family."

Again, this was part of the data I cited.

- Based on this definition, and according to 2006 statistics from the Australian Bureau of Statistics, there are 5,219,165 families in Australia.

I refer to my original comments: "...The majority of Australians live in some kind of family community." and "...Polling of what families want should [generally] reflect what Australians want..."

You ask "For instance where do you stand on a child's right to a mother and a father?"

Firstly, I'm not including any of my own biases here - so it doesn't matter what I believe. It matters what the data says.

Secondly, I assume you're referring to the issue of gay or lesbian parenting.

So, does the data include same-sex couples with children?

But the 2001 census found that nationally, same-sex couple families represented 0.1% of couples with children - 829 male couples have children, and 2,615 female.

So the number is entirely statistically insignificant. Even if ALL of these people, less than 0.05% of the population, believed in the exact opposite of everything that Family First believed in - it still wouldn't sway the figures.

However you split the pie, even if you take a very narrow definition of what a "family" is..."...polling of what families want should [generally] reflect what Australians want - you should never see a case where the vast majority of Australians disagree with what "families" want.

If you do see this, you see a party with another agenda." [As I said in my original comment.]

This is my point regarding Family First - that their policies do not reflect the general desires of Australian families.

Rather, they reflect the specific desires of people from within the Christian right (i.e. right-wing Christian ideals).

It's not about whether they're "right wing" or whether I disagree with their policies. (As I said in my previous comments, this is not the case, and there have been several times I supported their tough stances.)

Rather, it's about lies, half-truths and double-speak; Trying to appeal to the masses by claiming to represent something that you don't.

To cite Aesop and Jesus: be wary of the wolf in sheep's clothing.

Sounds like you've made up your decision - although, to be fair, my purpose wasn't to convince you to vote for someone other than Family First, but rather to correct to a comment Scott made above.

Best of luck on voting day. I hope that your vote counts, and that the candidates who represent you most in your electorates (both the Senate and Federal) gets in.