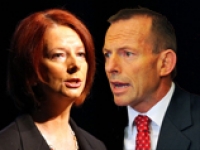 The voting is over and the 2010 Australian federal election has turned out to be the closest election result in our short history as a nation. No out-right leader has emerged yet and we may end up with a hung parliament.

A few observations are clear:

1. The Labor Party has had a large swing against them right across the nation, with many seats falling to the Liberals. Maybe the de-throning of Kevin Rudd has come back to haunt them after all. Julia Gillard looks a little shaken, to say the least.

2. The Liberal Party has made a remarkable comeback, after losing the nation's leadership a few years ago. Who would have thought that this would have occurred so quickly after Kevin Rudd's historic win over John Howard and his resultant high popularity rating even up to just twelve months ago. Tony Abbott has pulled off quite an achievement.

3. Like it or not, the Greens Party have emerged as a legitimate third party in our nation. They will hold the balance of power in the Senate and will be a force to be reckoned with in the years to come. Their appeal to the younger generation and to swinging voters disillusioned with the major parties is only growing.

4. If a government can be formed, there will only be a slight majority. Maybe this isn't such a bad result after all, as governing will require a greater degree of partnership and collaboration OR maybe it will just be difficult to get much done at all. Only time will tell.

5. The Christian vote continues to emerge as having a significant influence around election time. See a report about this here.

6. Finally, at times like these, it is good to remind ourselves that God rules in the daily aspects of our human lives, including politics. He puts one leader up and takes another one down. Everything and every one is under his ultimate authority and power. His will will be done. I can sleep on that.

I'm not at all convinced that "legitimate" is the word I would use in regard to the Greens - legitimate source of concern is probably more accurate- oh the damage they may do is what concerns me. However, I console myself with the reflection that other parties have had similiar power in the past and are now gone eg Australian Democrats, One Nation etc etc. Anyway, as a nation we are so far down the track that the Greens' radical policies merely reflect many peoples thinking and priorites.

On another note(entirely unrelated!), you might like to take a look at a website called: revivalcentral.com by a South African man called Derek Hoets- some of the articles on it are so beautiful and mirror SO many christians' heart-cry, that I felt like weeping, partly out of relief - and there's very little that can make me weep these days.

Thanks for your comment, Helen. By 'legitimate,' I wasn't meaning in a moral sense but more in a sense of their influence now that they have 11.5% of the national vote. Their policies are sure a mixed bag - their ethical policies on important matters such as abortion and sexuality are highly concerning while on the other hand they are one of the only parties to seek to address many of the environmental issues that a lot of people are concerned about.