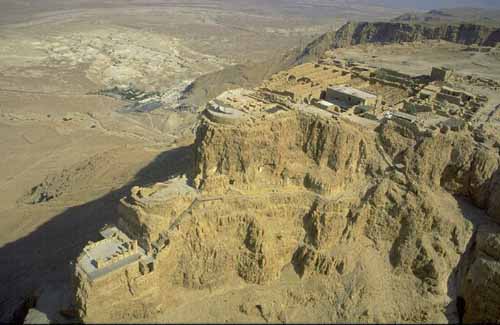 Another place we visited on our tour of Israel earlier this year was Masada. It is a stunning section of isolated rock plateau on the eastern edge of the Judean desert overlooking the Dead Sea.The cliffs on the steepest side are over 400 metres high. However, the top of the site is easily reached today via a cable car (although you can hike up the Snake Path, if you are keen).

According to the Jewish historian Josephus, Herod the Great built a refuge for himself here (between 37-31 BC) in the event of a revolt. After the destruction of the Second Temple in AD 70, a number of families from a Jewish sect fled here. It became the site of an infamous siege in AD 72 with the Roman governor surrounding the refuge for 2-3 months. During this time, the Romans built a rampart that eventually enabled a battering ram to break through the outer wall of the fortress.

When they entered the fortress the Romans discovered, to their surprise, that its 960 inhabitants had set all the buildings but the food storerooms ablaze and committed mass suicide rather than face certain capture, defeat, slavery or execution by their enemies. The story of the siege was communicated to Josephus by two women who survived.

The fortress is now a World Heritage Site. In 2007, a museum was opened on location with a theater that tells the story of the siege. It is quite moving and is a motivation for Jewish nationalism still today.

Slavery or death - what would you choose?